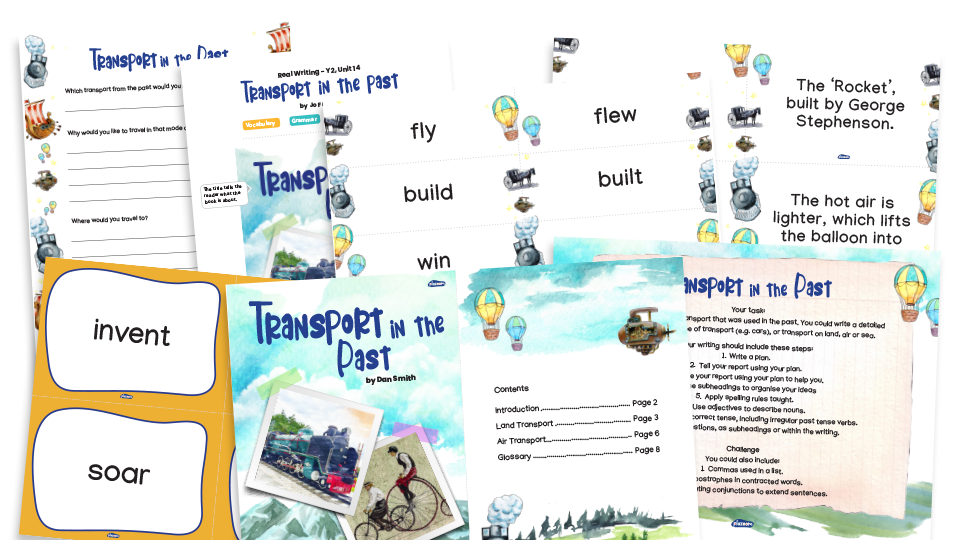 This writing unit for Year 2 is built around an original text by Dan Smith - an information text about transport in the past. The example text is available as a PDF in three versions (plain, illustrated and annotated); annotated and non-annotated PowerPoint presentations are also included.

In this two-week unit, pupils will learn the features of a report and how information is organised using the subheadings in the text. Pupils will learn to spell irregular past tense verbs and will learn how to create expanded noun phrases using adjectives to describe and specify. Pupils will also explore how to form question sentences and how they can be used as subheadings in reports. In the final writing task, pupils will write their own report about transport in history. They could write about a particular type of transport (e.g. cars) or transport used on land, air or sea, following the structure of the model text.

1. Vocabulary: to use and spell irregular past tense verbs

Pupils will: explore how some verbs do not follow the rules when adding the suffix -ed in the past tense. They will match present tense verbs to their irregular past tense form.

2. Grammar: to use expanded noun phrases to describe and specify

Pupils will: learn how to describe nouns in their writing by using adjectives and information after the noun. Pupils will practise describing transport from the past by creating noun phrases. They will then design some transport that they think may be used in the future and write a description of it, using expanded noun phrases.

Pupils will: learn how question sentences are written and punctuated. They will write questions that could be asked that give the answers on sentence cards and will write their own questions about sea transport in the past.