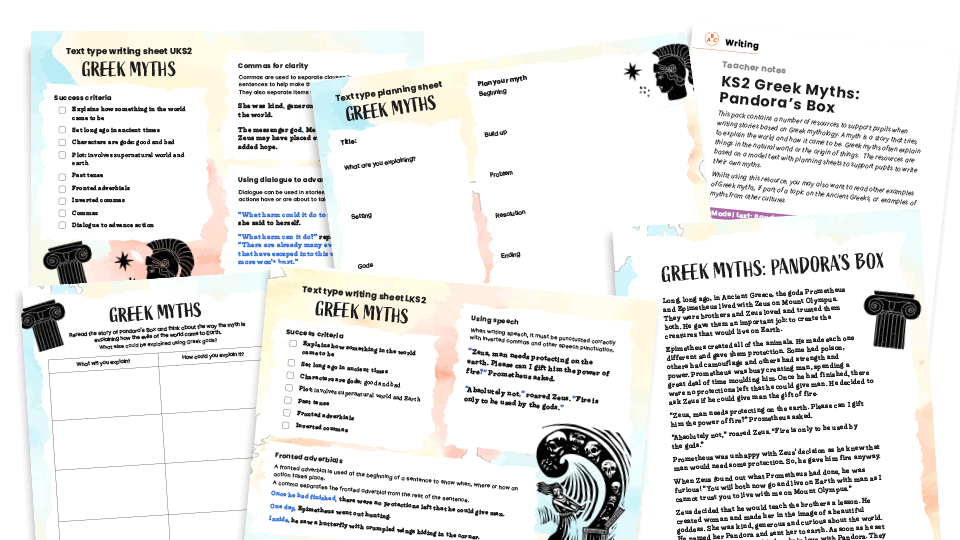 Explore Greek myths with this text types resource pack for KS2, a perfect literacy resource as part of a topic on the Ancient Greeks. Pupils will read the model text, a retelling of the myth Pandora’s Box, and write their own myths based on Greek gods and mythology. They will use the model text to identify grammar and punctuation used which includes the following: fronted adverbials; speech punctuation; the use of commas for clarity; and dialogue to advance action. These can then be applied in their own writing.

What is a myth?
A myth is a story that tries to explain the world and how it came to be. Greek myths often explain things in the natural world or the origin of things.

National Curriculum English programme of study links:
year 3/4
Pupils should plan their writing by discussing writing that is similar to that which they are planning to write in order to understand and learn from its structure, vocabulary and grammar.
Pupils will use and punctuate direct speech
Pupils will use fronted adverbials, including using commas after them
year 5 /6
Pupils should plan their writing by identifying the audience for and purpose for writing, selecting the appropriate form and using other similar writing as models for their own.
Pupils should be taught to draft and write by ... integrating dialogue to convey characters and advance action
Pupils should be taught to use commas to clarify meaning and avoid ambiguity