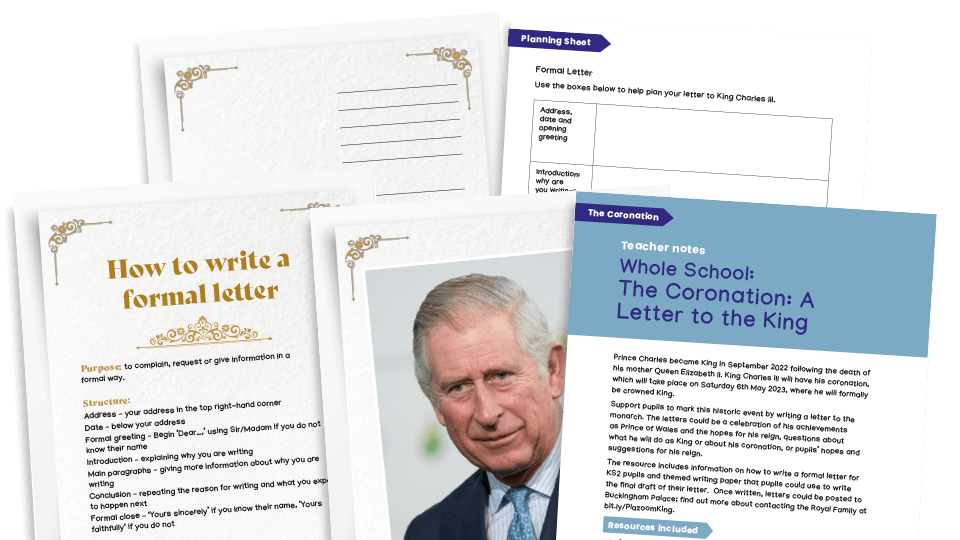 Prince Charles became King in September 2022 following the death of his mother Queen Elizabeth II. King Charles III’s coronation will take place on Saturday 6th May 2023, where he will formally be crowned King.

Support pupils to mark this historic event by writing a letter to the monarch. The letters could be a celebration of his achievements as Prince of Wales and the hopes for his reign, questions about what he will do as King or about his coronation, or pupils’ hopes and suggestions for his reign.

The resource includes information on how to write a formal letter for KS2 pupils and themed writing paper that pupils could use to write the final draft of their letter. Once written, letters could be posted to Buckingham Palace.

What is a coronation?

A coronation is a ceremony during which a sovereign is crowned. It usually takes place several months after his or her accession, and is an occasion for great pageantry and national celebration.

When is the coronation of King Charles III taking place?

The coronation of King Charles III will take place on Saturday, May 6th, 2023. Monday, May 8th will be a bank holiday.

What is included in this whole-school resource pack?