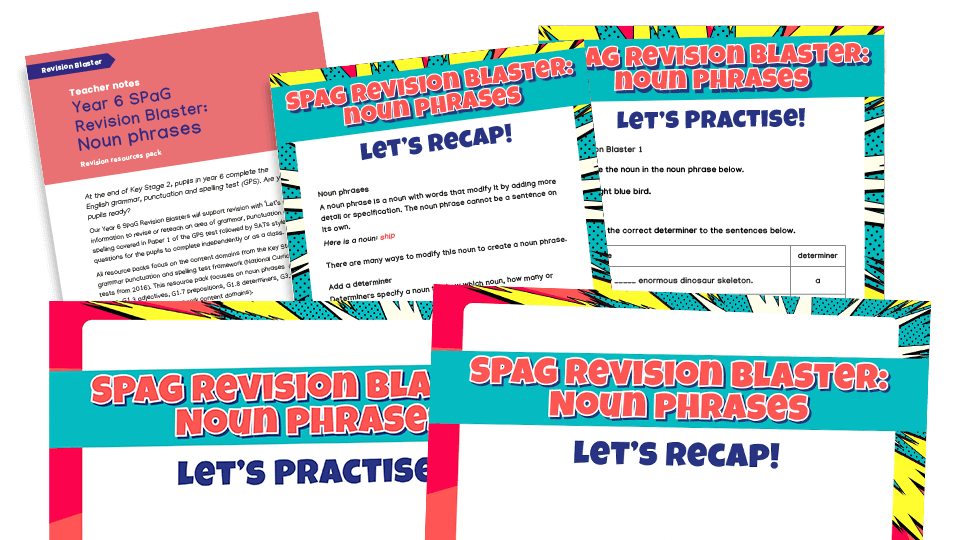 Our Year 6 SPaG Revision Blaster packs are the perfect way to check children’s knowledge and understanding of the KS2 programme of study for English. The area of grammar, punctuation and spelling covered in this SPaG revision blaster is the use of noun phrases.

What is a noun phrase?

A noun phrase is a phrase with that includes a noun and usually a determiner (for example a man or those children). They can be expanded using adjectives, modifying nouns and prepositional phrases. A noun phrase cannot be used as a sentence on its own.

What is a determiner?

Determiners are used before a noun to create a noun phrase. They show which noun, how many or how much. Examples of determiners include a, the, some, one, every, his or hers.

What is an adjective?
Adjectives are words that usually come before a noun and modify it, adding description or specifying which person or object it is. In this sentence ‘The bright sun is high in the blue sky’. The adjectives ‘bright’ and ‘blue’ describe the sun and sky. In the sentence ‘We need plain flour for the recipe.’ The adjective plain is specifying which flour we need.

What is a modifying noun?
A modifying noun is used to give information about another noun to modify it. Examples include: the car door, vegetable soup or gift shop.

What is a preposition phrase?
A prepositional phrase is a group of words with a preposition at its head that is followed by a noun, pronoun or noun phrase. They can be used to modify a noun or verb. When they modify a verb, they are also known as an adverbial.