Topical Tuesdays:  ‘And the Oscar goes to…’ - KS2 News Story and Reading and Writing Activity Sheet from The Week Junior 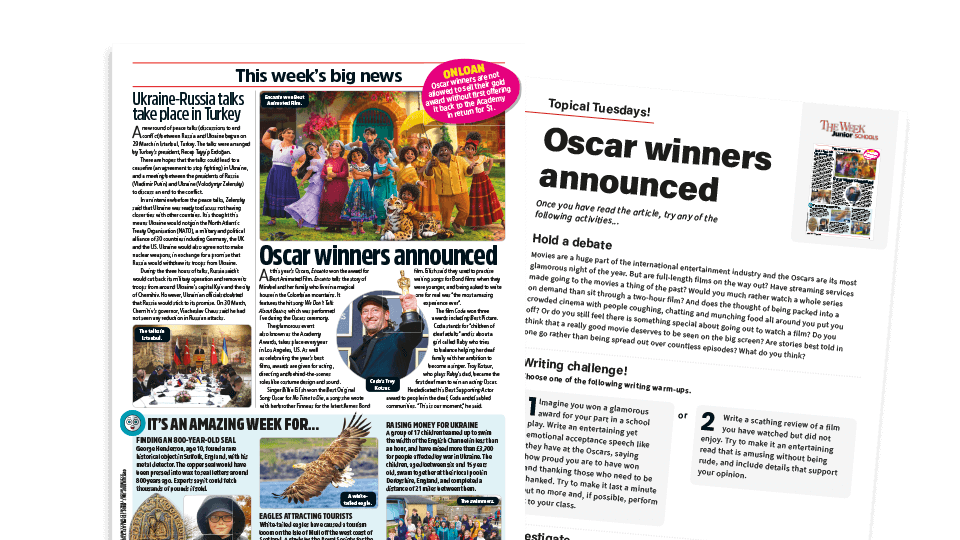 At this year’s Oscars, Encanto won the award for Best Animated Film. This resources pack includes an article from The Week Junior magazine, along with a sheet of activities designed to get children thinking, talking and writing about what the story means to them.

Debate
Movies are a huge part of the international entertainment industry and the Oscars are its most glamorous night of the year. But are full-length films on the way out? Would you much rather watch a whole series on demand than sit through a two-hour film? And does the thought of being packed into a crowded cinema with people coughing, chatting and munching food all around you put you off? Or do you still feel there is something special about going out to watch a film? Are stories best told in one go rather than being spread out over countless episodes? What do you think?

Writing challenges
Imagine you won a glamorous award for your part in a school play. Write an entertaining yet emotional acceptance speech like they have at the Oscars, saying how proud you are to have won and thanking those who need to be thanked.

Write a scathing review of a film you have watched but did not enjoy. Try to make it an entertaining read that is amusing without being rude, and include details that support your opinion.

Investigate
Which three films have won the most Oscars? Write a brief fact-file for each, outlining the basic plot, the main stars and director.

To find out more about The Week Junior and to download its free resources, please go to https://schools.theweekjunior.co.uk.