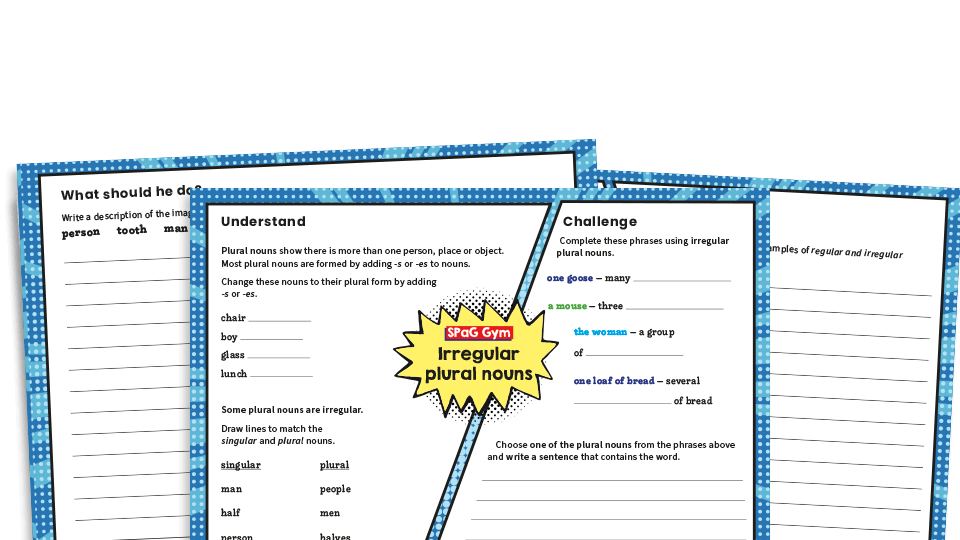 Practise and revise the use of irregular plural nouns with pupils in year 3 or year 4 with this bright, appealing PDF grammar worksheet.

Activities include test-style questions and opportunities for creative writing responses, with eye-catching images as prompts.

Challenge
Write the nouns in their plural form

Explain
Explain what a plural noun is, giving examples of plural nouns in their regular and irregular forms.

What is a plural noun?

A plural noun has the suffix -s or -es added and means there is more than one of the object. When there is only one item, this is singular.

I have eaten a cake.
The noun cake is singular (only one cake).

I have eaten all the cakes.
The noun cakes is plural (more than one cake).

When nouns end in x, sh, s, ss, ch, tch or z, the suffix -es is added and creates an extra syllable (or beat) to the word.

We opened the box.
The noun box is singular (only one box).

We opened the boxes.
The noun boxes is plural (more than one box).

Some plural nouns do not follow the rule of adding -s or -es and are referred to as irregular.