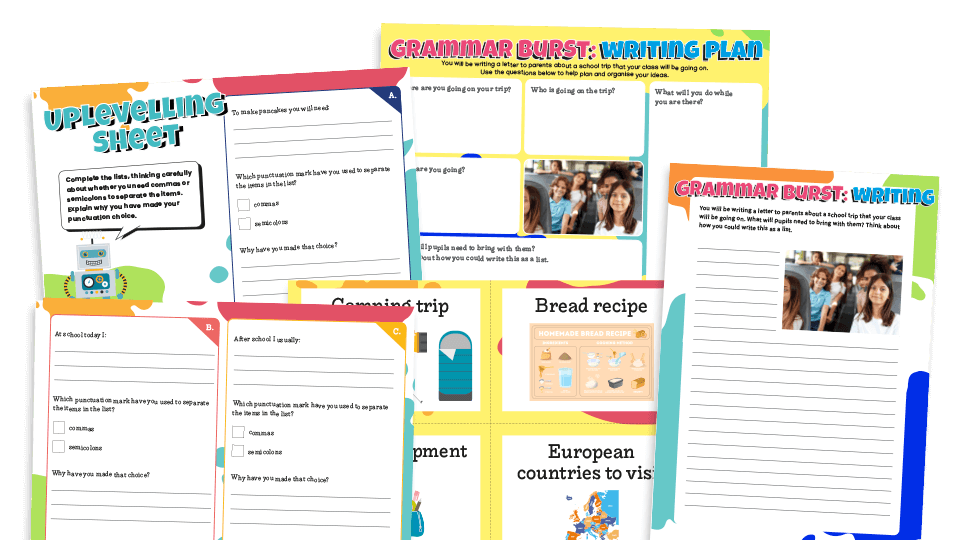 This powerful KS2 grammar resources pack provides everything you need to teach a series of five lessons on punctuating complex lists using colons and semicolons correctly in Year 6, culminating in an extended writing task where children can use their grammatical understanding in context.

This primary resource pack includes:
Punctuating lists PowerPoint
List image cards
Challenge sheet - circle the colons, semicolons and commas within lists, add punctuation so that the lists are punctuated correctly, complete the lists given and write paragraphs about themselves that includes at least one list correctly punctuated with colons and semicolons
Uplevelling sheet
Writing plan
Writing paper
Teacher notes

Colon examples
Mrs Jones said: “This was not supposed to happen.”
They talked about three things: the weather, what they’d had for lunch and how noisy it was.
The pain was bad enough to make one thing clear: he’d really hurt himself.
What is a semicolon?
A punctuation mark that indicates a pause, typically between two closely related clauses, that is more pronounced a comma but less pronounced than a full stop.

Semicolon examples
I had a huge meal; however, I am already hungry again.
I saw a large bird; it was eating a worm.
Let’s go to the library; there is a book I need to borrow.
I know you don’t like muesli; nevertheless, it is healthier than sugary cereals.
National Curriculum English programme of study links
Pupils should be taught to indicate grammatical and other features by using semicolons, colons or dashes to mark boundaries between independent clauses [and] using a colon to introduce a list.