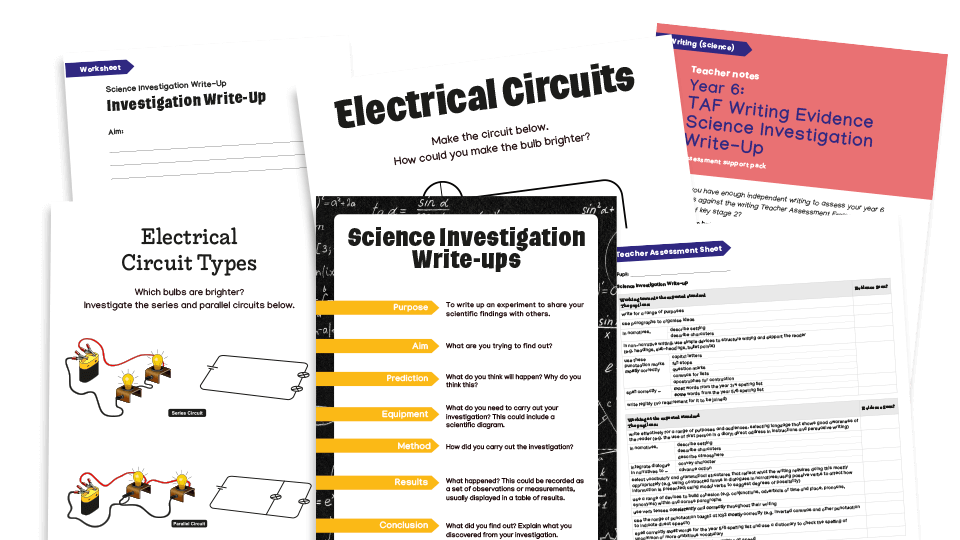 Do you have enough independent writing to assess your year 6 pupils against the writing Teacher Assessment Framework for the end of Key Stage 2?

Plazoom has created a selection of writing activities, linked to the foundation subjects where possible, to provide opportunities for independent writing. These could be used to assess pupils against the TAF statements for writing, providing vital evidence of the standard that pupils are working which could be used for internal or external moderation.

‘Pupils’ writing, on which teachers base their judgements, must be produced independently by the pupil.’ (Key stage 2 teacher assessment guidance, October 2019). This writing activity provides success criteria to help pupils understand what they have learnt and a stimulus for writing but teachers should ‘avoid modelling or over scaffolding the expected outcome.’ (Key Stage 2 teacher assessment guidance, October 2019)

In this writing task, pupils will write up a scientific investigation within the topic of electricity. This could be used within a science unit on electrical circuits as part of their learning about this area of science. Pupils will first investigate how to make a bulb brighter in a simple series circuit, discussing how a report of the investigation would be produced before going on to investigate the difference between series and parallel circuits. Alternatively, the resources could be used to write up and investigation within a different science topic.

The activity can be used to provide an opportunity for cross-curricular writing, allowing pupils to demonstrate their writing skills independently, whilst also demonstrating their subject knowledge and understanding of scientific concepts taught.

Personal writing skills checklist
For pupils to write their own writing checklists to encourage independent editing.

Science investigation write-up skills checklist
A list of features, without modelled examples, for pupils to use as a checklist for editing writing.

Adverbials for cohesion poster
A poster to display with examples of adverbials that could be used in non-fiction writing.

Investigating circuits 2
A PDF with a prompt for a second investigation involving circuits.

Science investigation write-up template
To support pupils when planning and organising their ideas. It could also be used when pupils write up their final draft.

Themed writing paper
A PDF writing sheet for pupils to use when writing the final draft of their writing.

TAF Statements the writing could provide evidence for

WTS
To use paragraphs to organise ideas.
In non-narrative writing, use simple devices to structure the writing and support the reader (e.g. headings, subheadings, bullet points)
EXS
To select vocabulary and grammatical structures that reflect what the writing requires, doing this mostly appropriately
To use a range of devices to build cohesion within and across paragraphs - adverbials
GDS
To write effectively for a range of purposes and audiences, selecting the appropriate form and drawing independently on what they have read as models for their own writing

This resource is part of the Plan, assess, review collection. View more from this collection