We’re sorry.
This is available with an individual or school subscription only.

Directory of the Primary English literacy consultancy, Rachel has over 20 years’ experience in primary education, in which time she has been a SENCO, English subject lead and deputy headteacher. She previously worked as an English consultant for Coventry Local Authority and has written for publishers including Collins and Teach Primary magazine.

Whether you’re looking to teach joining words with ‘and’ in Year 1, or you need your Year 6s to recognise the subjunctive form, this series of grammar videos from Rachel Clarke will arm you with some excellent strategies. 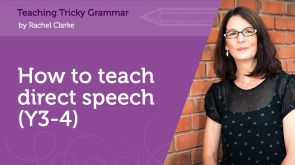 Learn new techniques, refresh your knowledge or train your team with our complete library of online courses.

Success in Reading and Writing