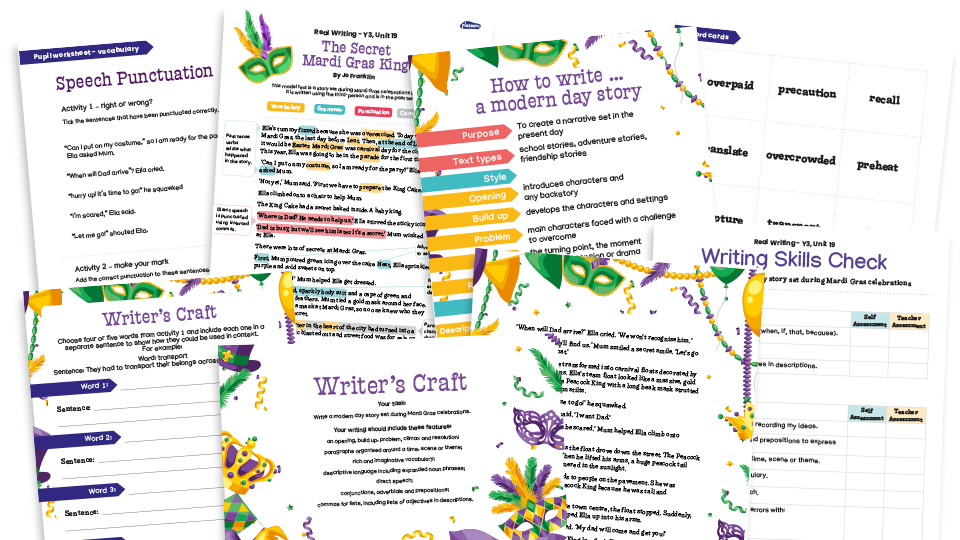 This writing unit for Year 3 is built around an original model text by Jo Franklin - a story set during Mardi Gras celebrations in modern day USA. The example text is available as a PDF in three versions (plain, illustrated and annotated); annotated and non-annotated PowerPoint presentations are also included.

In this two-week unit, pupils will have an opportunity to learn some vocabulary connected with this colourful carnival. They will also look at prefixes, and how to punctuate direct speech. It will culminate in them writing their own story based on a Mardi Gras theme and set in the modern day.

1. Vocabulary - To use a range of prefixes

Pupils will: revisit the meaning of ‘prefix’ and identify them in words, explaining their meaning; use prefixes to understand word meanings; match prefixes with definitions; use words with prefixes in sentences.

2. Composition - To use inverted commas to punctuate direct speech

Additional skills to teach or revisit

Use inverted commas to mark the beginning and end of direct speech (a speaker’s words written down exactly as they were spoken).
The conductor shouted, “Sit down!”