5.3 Year 5: using relative clauses beginning with who, which, where, when, whose, that or with an implied (i.e omitted) relative pronoun 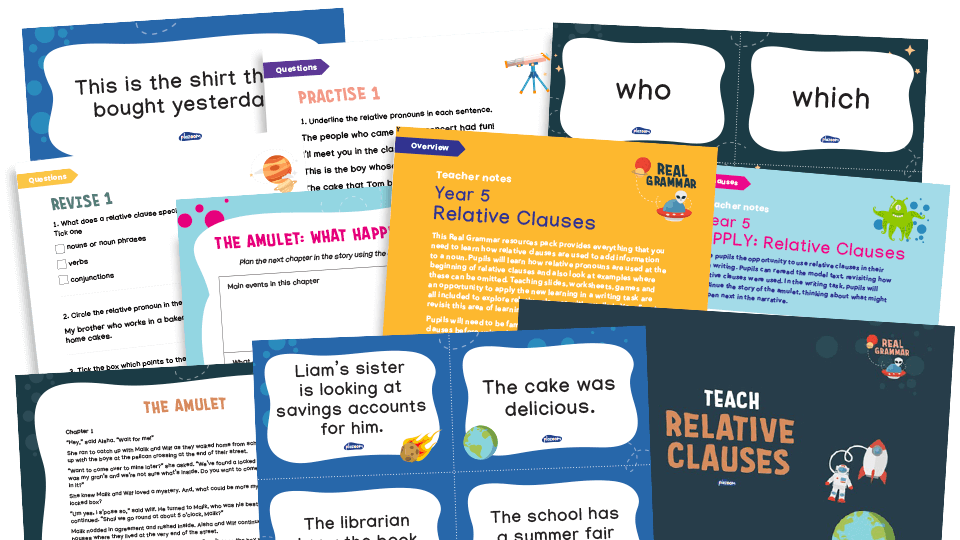 Relative clauses are a type of subordinate clause that adds information about a noun.

They can be used to specify which person or thing.

They can also add information about the person or thing.

We now know when the song was written. This is called a non-defining relative clause. It does not specify which person or thing is being written or talked about but gives more information. Commas are needed to punctuate these relative clauses.

What is a relative pronoun?

Relative clauses begin with a type of pronoun (a word that can be used to replace a noun in a sentence) called a relative pronoun. These are who, which, where, when, whose, whom or that.

When can relative pronouns be omitted?

The word ‘omitted’ means to be removed. We can omit relative pronouns in some relative clauses if the noun is the object of the verb.

‘Whom’ can be omitted because ‘The man’ is the object of the verb ‘met’ (Steve met the man).

‘That’ can be omitted because ‘The shoes’ are the object of the verb ‘bought’ (I bought the shoes).

This section includes PowerPoint teaching slides and teaching notes with an optional script to introduce relative clauses. It can also be used to revisit this aspect of grammar with pupils.

6.1a Year 6: recognising vocabulary and structures that are appropriate for formal...

5.3 Year 5: using relative clauses beginning with who, which, where, when, whose, that...