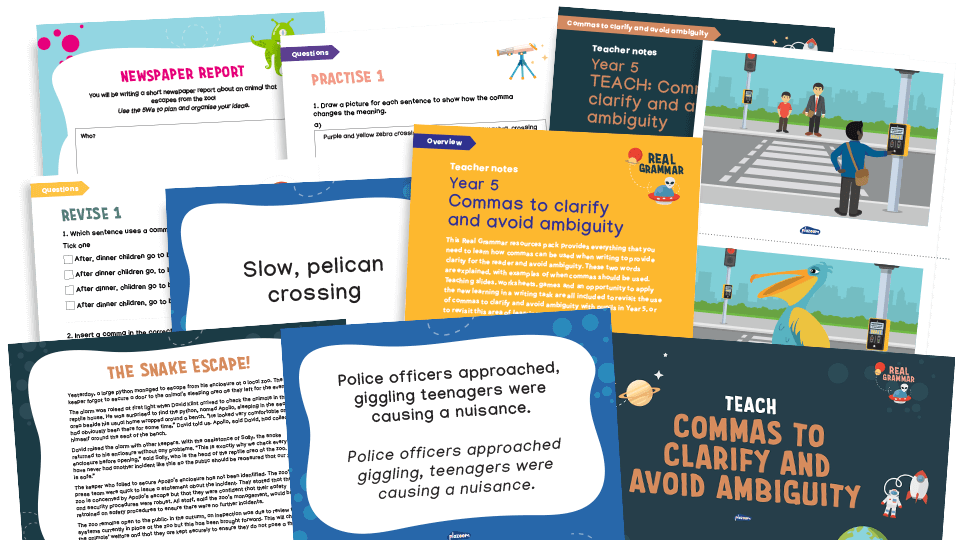 This Real Grammar KS2 resources pack provides everything that you need to learn how commas can be used when writing to provide clarity for the reader and avoid ambiguity. These two words are explained, with examples of when commas should be used. Teaching slides, worksheets, games and an opportunity to apply the new learning in a writing task are all included to revisit the use of commas to clarify and avoid ambiguity with pupils in Year 5, or to revisit this area of learning.

Pupils need to have a secure understanding of how commas are used to punctuate the following: lists (Year 2); after fronted adverbials (Year 4); with subordinate subordinate clauses (year 3); and to punctuate parenthesis (Year 5). Separate Real Grammar packs are available for each of these in the relevant year groups.

When are commas used?

Commas are used in a variety of ways. They are used to clarify meaning and avoid ambiguity when the meaning could be unclear, which is the focus of this resource pack.

Commas are used in a variety of ways to help clarify information for the reader and avoid ambiguity in the following ways:

What does ‘clarify’ mean?

To clarify means to make something less confusing and more understandable. Related words are clarifying, clarified and clarification.

What does ‘ambiguity’ mean?

Ambiguity means that something could be open to more than one interpretation. It could be ambiguous.

How do commas provide clarity and avoid ambiguity?

Commas help make the meaning clear to the reader and avoid confusion. Some examples are listed below.

Making it clear who is being named

In this sentence, Karen is being spoken to and told the information that the sports coach is leaving.

In this sentence, Karen is the name of the sports coach.

In this sentence, three things that Max loves are listed.

In this sentence, it looks like Max enjoys two things, one of them being baking puppies!

In this sentence, the dark owls flew after something else had happened.

In this sentence, the owls flew ‘after dark’.

Showing who said something in reported speech

In this sentence, the reader may think that the puppy is talking about the young girl.

In this sentence, we know that the young girl is talking about the puppy.

This section includes PowerPoint teaching slides and teaching notes with an optional script to introduce commas for clarity and to avoid ambiguity. It can also be used to revisit this aspect of grammar with pupils.

6.1a Year 6: recognising vocabulary and structures that are appropriate for formal...

5.3 Year 5: using relative clauses beginning with who, which, where, when, whose, that...