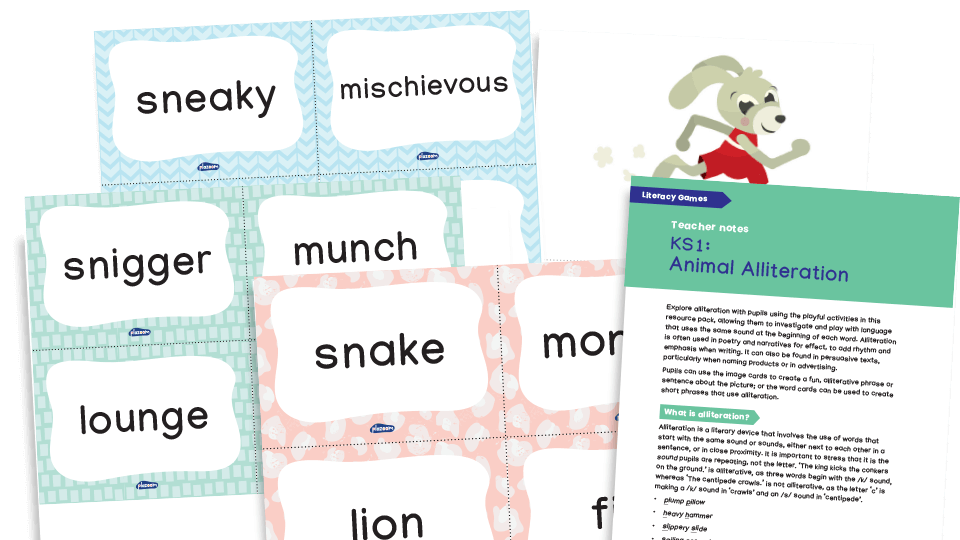 Explore alliteration with pupils using the playful activities in this resource pack allowing them to investigate and play with language that uses the same sound at the beginning of each word. Alliteration is often used in poetry and narratives for effect, to add rhythm and emphasis when writing. It can also be found in persuasive texts, particularly when naming products or in advertising.

Pupils can use the image cards to create a fun alliterative phrase or sentence about the picture or the word cards can be used to create short phrases that use alliteration in Key Stage 2.

What is included in this Key Stage 2 alliteration resource?

Alliteration is a literary device that involves the use of words that start with the same sound or sounds, either next to each other in a sentence, or in close proximity. It is important to stress that it is the sound pupils are repeating, not the letter. ‘The king kicks the conkers on the ground.’ is alliterative, as three words begin with the /k/ sound, whereas ‘The centipede crawls.’ is not alliterative, as the letter ‘c’ is making a /k/ sound in ‘crawls’ and a /s/ sound in ‘centipede’.

Year 3 / 4 Composition
Pupils should be taught to:
- plan their writing by discussing and recording ideas
- draft and write by composing and rehearsing sentences orally ...

Year 5/6 Composition
pupils should be taught to:
- plan their writing by noting and developing initial ideas ...
- evaluate and edit by assessing the effectiveness of their own and others’ writing