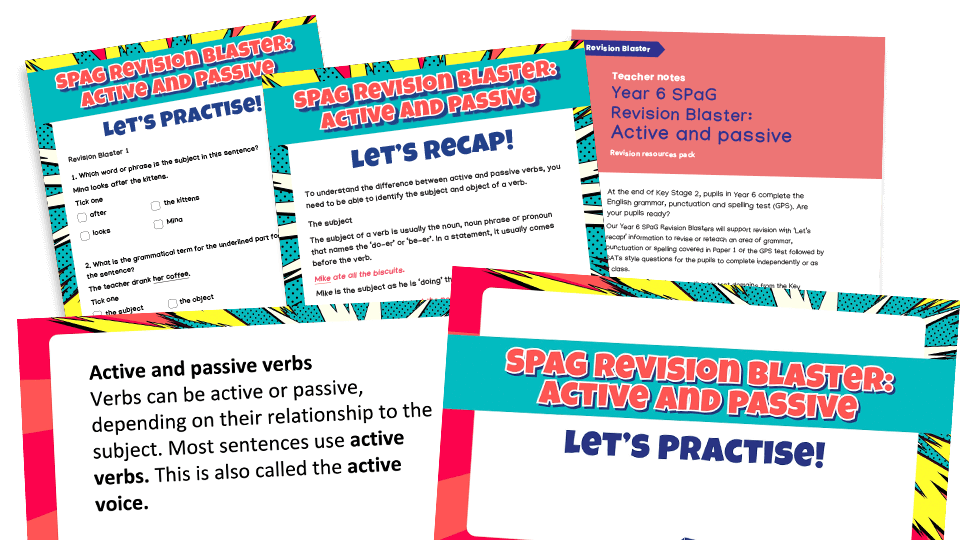 Our Year 6 SPaG Revision Blaster packs are the perfect way to check children’s knowledge and understanding of the KS2 programme of study for English. The areas of grammar, punctuation and spelling covered in this SPaG revision blaster are active and passive verbs and the subject and object in sentences.

The subject and object

Mike ate all the biscuits. (‘Mike’ is the subject)

What is the object of a verb?

The object is a noun, noun phrase or pronoun that usually comes straight after the verb. It shows what the verb is acting upon.

Mike ate all the biscuits. (‘the biscuits’ is the object as they are being eaten)

What are active and passive verbs?

Verbs can be active or passive depending on its relationship to the subject. Most sentences use active verbs.
When the verb is active, the subject of the sentence completes the action.

Mike ate all the biscuits.

In this sentence, Mike is eating the biscuits. Mike is the subject in the sentence and the word ate is an active verb.

When the verb is passive, the subject is having the action done to it. It is used to focus on what is happening rather than who is completing the action and is often used in formal writing.

The biscuits were eaten by Mike.

In this sentence, the focus is on what was eaten. The subject is the word biscuits and the words were eaten form a passive verb. The object in the original sentence is now the subject (biscuits) and the past tense form of the verb plus the verb be (were eaten). The original subject in the active sentence becomes the object using the preposition by (by Mike). Sometimes this can be removed. (The biscuits were eaten.)