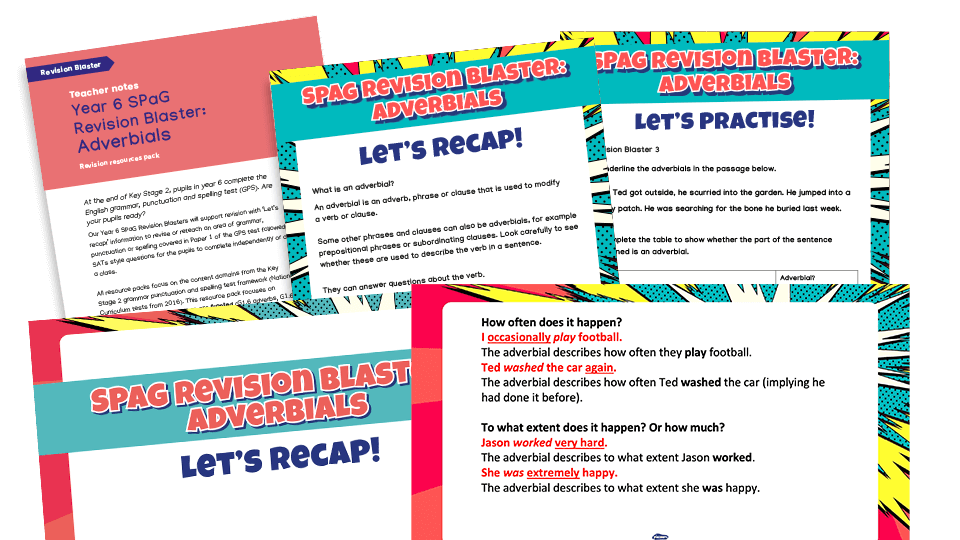 Our Year 6 SPaG Revision Blaster packs are the perfect way to check children’s knowledge and understanding of the Key Stage 2 programme of study for English. The area of grammar, punctuation and spelling covered in this SPaG revision blaster is adverbials.

An adverbial is an adverb, phrase or clause that is used to modify a verb or clause. Prepositional phrases and subordinate clauses are also types of adverbials. They show when, how, how often or how long, to what extent, where or why an action is occurring.

The bus will arrive in ten minutes.
The prepositional phrase is used as an adverbial (or adverbial phrase), as it modifies the verb arrive.

He walked until he reached the bridge.
The subordinating clause is used as an adverbial as it modifies the verb walked.

Fortunately, he had remembered his homework.
The adverb is used as an adverbial as it modifies the whole clause by commenting. This is an example of a fronted adverbial, as it comes at the beginning of the sentence. A comma must be used after the fronted adverbial.