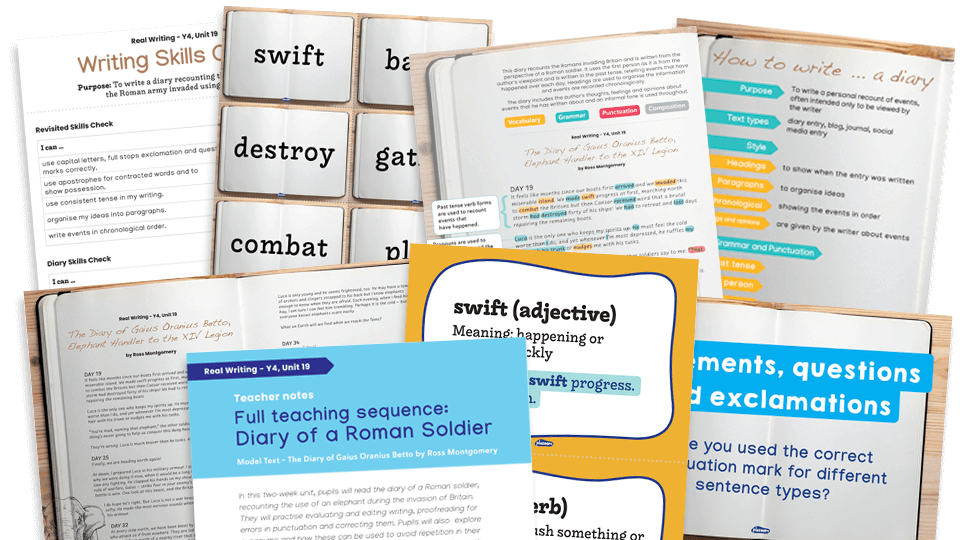 Unit overview
This writing unit for Year 4 is built around an original model text by Ross Montgomery; a fascinating diary recount about the Romans use of elephants in the invasion of Britain, written from a Roman soldier’s viewpoint. The example text is available as a PDF in three versions (plain, illustrated and annotated); annotated and non-annotated PowerPoint presentations are also included.

In this two-week unit, pupils will investigate how synonyms can be used to expand their vocabulary choices in their writing and will learn how to proofread writing for punctuation errors. In their final writing task, pupils are asked to write their own diary recounting the same events as the model text but from a British soldier’s viewpoint. There is an opportunity to explore this viewpoint through roleplay. This unit could be used within a history topic about the Romans and their invasion of Britain.

1. Vocabulary: To build a varied and rich vocabulary through the use of synonyms

Pupils will: match pairs of synonyms; use a thesaurus to find synonyms for words; edit writing to improve vocabulary choices using their knowledge of synonyms

2. Grammar: To proof-read for punctuation errors

Pupils will: proof-read writing for punctuation errors, visiting a variety of editing stations