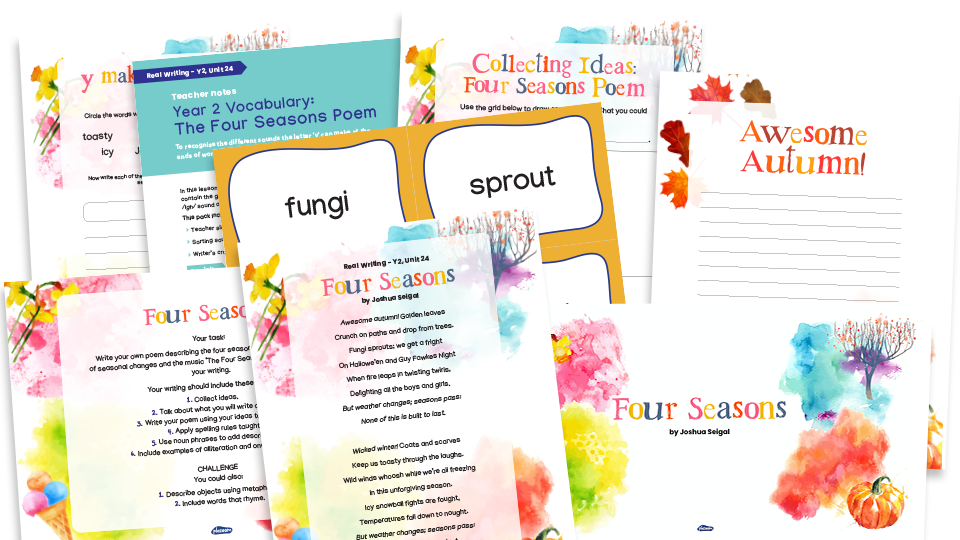 This writing unit for Year 2 is built around an original text by Joshua Seigal - a poem describing the four seasons. The example text is available as a PDF in three versions (plain, illustrated and annotated); annotated and non-annotated PowerPoint presentations are also included.

In this two-week unit, pupils will explore how the poem is organised, identifying patterns in how it is structured using rhyme and repeated lines. Pupils will learn how the letter ‘y’ can make the /igh/ sound and will explore words that are homonyms (words with the same spelling but different meanings). Pupils will also investigate different descriptive devices used by the poet
including noun phrases, alliteration, metaphors and onomatopoeia. In the final writing task, pupils will write their own poem about the seasons, inspired by the music ‘The Four Seasons’ by Vivaldi.

1. Vocabulary: to recognise the different sounds the letter ‘y’ can make at the ends of words

Pupils will: pupils will practise blending and segmenting words that contain the grapheme y, identifying whether it is making the /ee/ or /igh/ sound at the end of words.

2. Vocabulary: to discuss and clarify the meaning of words

Pupils will: investigate the different devices the poet has used to add description in the poem ‘Four Seasons’. They will look for examples of noun phrases and will be introduced to onomatopoeia, alliteration and metaphors. Pupils will then orally rehearse sentences to explore their ideas.

What is a homonym?

A word that is formed from the sound that is made.

What is a metaphor?

A metaphor is a figure of speech where you say one thing (figuratively) is another thing.