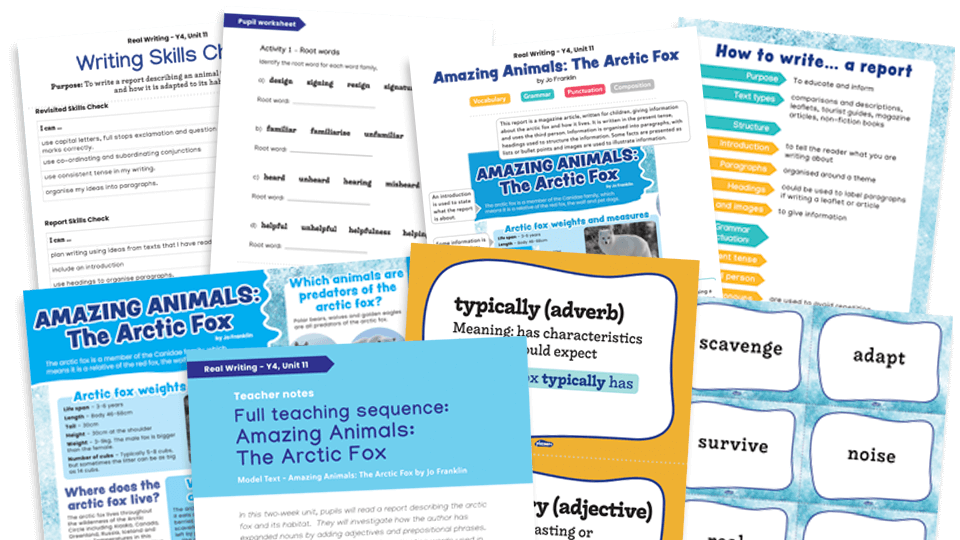 This writing unit for Year 4 is built around an original model text by Jo Franklin; a fascinating report describing the arctic fox and its habitat. The example text is available as a PDF in three versions (plain, illustrated and annotated); annotated and non-annotated PowerPoint presentations are also included.

In this two-week unit, pupils will investigate how nouns can be modified with prepositional phrases and explore word families, using their knowledge of prefixes and suffixes. In their final writing task, pupils will create their own report about an amazing arctic animal. This unit could be used as part of a geography topic on the Arctic or within a science unit based on animals and their habitats.

Two fully-resourced lessons are included for the following Year 4 English objectives, which can form part of the unit or be taught discretely:

1. Vocabulary: To explore morphology of words

Pupils will: identify the root word for a word family; complete given sentences; create their own word families using given word roots and use these to create sentences

What are prepositional phrases?

A prepositional phrase is a group of words with a preposition at its head that is followed by a noun, pronoun or noun phrase. They can be used to modify a noun or verb. When they modify a verb, they are also known as an adverbial.

The prepositional phrases are bold in the sentences below.