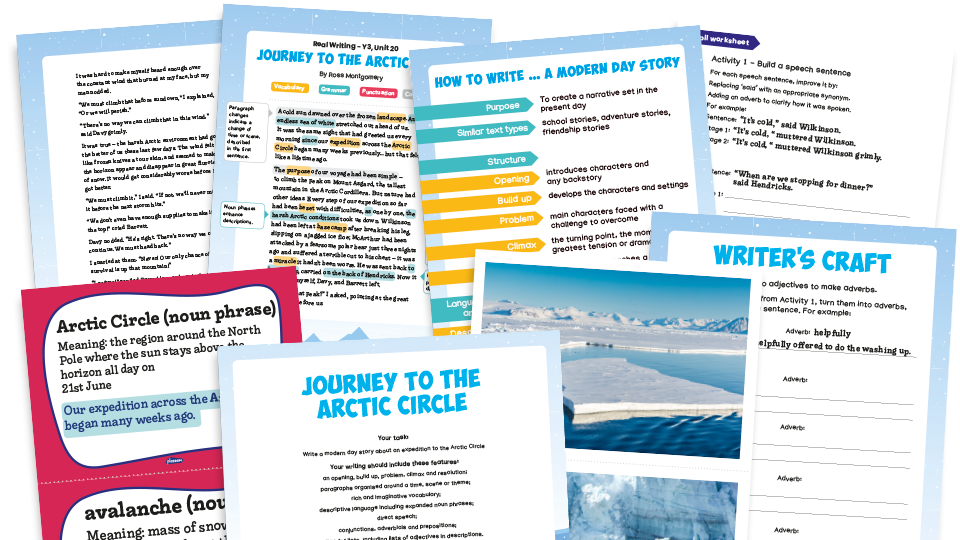 This writing unit for Year 3 is built around an original model text by Ross Montgomery - a story describing an expedition to the Arctic Circle, which turns out to be imaginary! The example text is available as a PDF in three versions (plain, illustrated and annotated); annotated and non-annotated PowerPoint presentations are also included.

In this two-week unit, pupils have an opportunity to learn vocabulary connected with Arctic exploration and will investigate how the suffix -ly can be used to form adverbs. Pupils will also explore how synonyms for ‘said’ can be used in the reporting clause when writing direct speech. Finally, they will write their own story based on an Arctic exploration theme.

1. Vocabulary - To use the suffix -ly to form adverbs

Pupils will: revisit word classes; understand how adverbs modify verbs and that whilst they often end with the suffix -ly, they do not always (nor are all words ending with -ly suffixes); understand the spelling rules for adding the suffix -ly, and exceptions; turn adjectives into adverbs, and use them in sentences.

2. Composition - To use synonyms for said when using direct speech