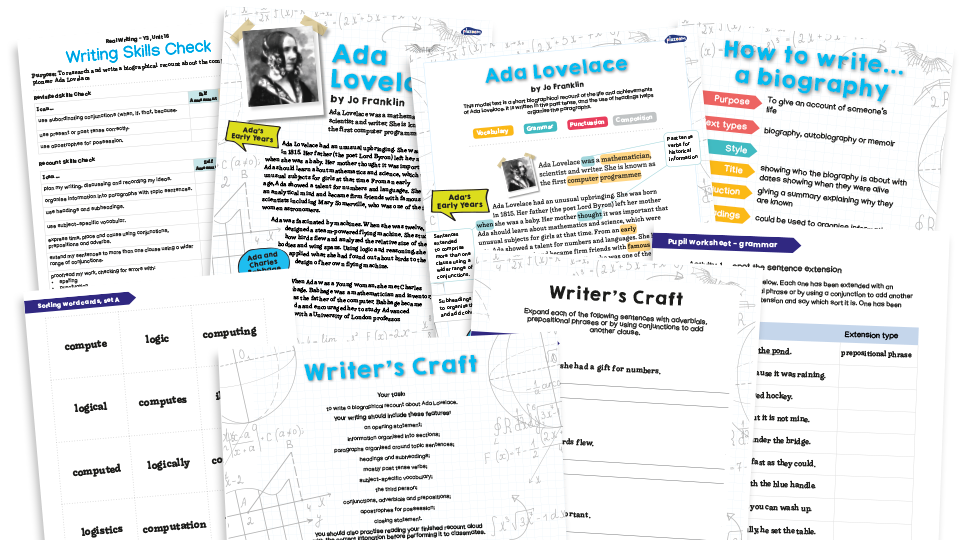 This writing unit for Year 3 is built around an original model text by Jo Franklin - a biographical recount of the life and achievements of Ada Lovelace. The example biography text is available as a PDF in three versions (plain, illustrated and annotated); annotated and non-annotated PowerPoint presentations are also included.

In this two-week unit, pupils will read a biographical recount, describing the life of computing pioneer Ada Lovelace. They will have an opportunity to learn technical vocabulary related to logic and computing. It will culminate in them writing their own version of a biography of Ada Lovelace

1. Vocabulary - To explore word families based on common words

2. Grammar - To extend sentences using a range of conjunctions, adverbials and prepositions

A conjunction links words, phrases or clauses and is a type of cohesive device. They can be co-ordinating or subordinating and are used to form multi-clause sentences.

What is an adverb?

Adverbs are words that modify verbs but can also modify adjectives, other adverbs or whole sentences. They can give the answers to the following questions within a sentence: How ...? When ...?, Where…?, How often…? or How much ...? Adverbs can, but do not always, end with the suffix -ly. We can change adjectives to adverbs by adding the suffix -ly. Examples of adverbs are below

A preposition comes before a noun, pronoun or noun phrase and can link these to another part of a sentence. They can show position or direction, timing or show the relationship between parts of a sentence.

This preposition shows relationship, ‘what’ they have learnt.