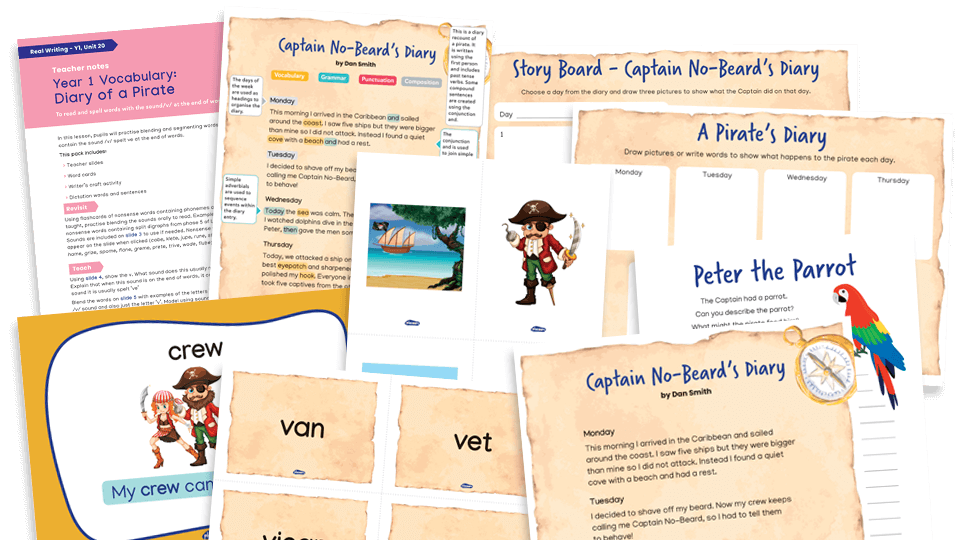 Unit overview
This writing unit for Year 1 is built around an original text by Dan Smith - a fictional diary of a pirate. The example text is available as a PDF in three versions (plain, illustrated and annotated); annotated and non-annotated PowerPoint presentations are also included.

In this two-week unit, pupils will learn when capital letters should be used for proper nouns and the personal pronoun I, and will learn to read and spell the days of the week. For the final writing task, pupils will write their own diary recounting the week of a pirate. This unit could be used alongside work in geography, using geographical vocabulary to describe places, particularly coasts and oceans. It could also be used within a class topic of pirates.

Key curriculum skills
Four fully-resourced lessons are included for the following Year 1 English objectives, which can form part of the unit or be taught discretely:

4. Grammar: To sequence sentences
Pupils will: create simple story boards for a day of the week to show events that happen in ‘Captain No-Beard’s Diary’ by Dan Smith. They will learn how time adverbials can be used to help sequence events and will use their story board to orally compose sentences with simple time adverbials.