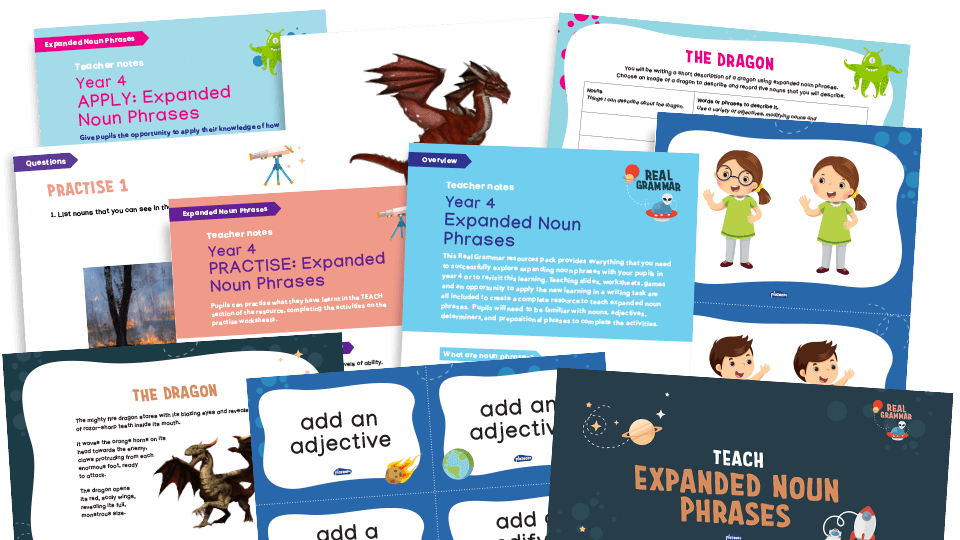 This Real Grammar KS2 resources pack provides everything that you need to successfully explore expanding noun phrases with your pupils in Year 4 or to revisit this learning. Teaching slides, worksheets, games and an opportunity to apply the new learning in a writing task are all included to create a complete resource to teach expanded noun phrases. Pupils will need to be familiar with nouns, adjectives, determiners, and prepositional phrases to complete the activities.

What are noun phrases?

A noun phrase is a noun with a word added before the noun. These words are called determiners.

We can expand noun phrases by adding more information before or after the noun. These could be adjectives, modifying nouns or a prepositional phrase.

How do we expand a noun phrase?

In the examples below, the noun phrase the man has been expanded.

These are called expanded noun phrases.

This section includes PowerPoint teaching slides and teaching notes with an optional script to introduce expanded noun phrases. It can also be used to revisit this aspect of grammar with pupils.

4.7b Year 4: S - noun phrases expanded by the addition of modifying adjectives, nouns...

4.7a Year 4: S - noun phrases expanded by the addition of modifying adjectives, nouns...

4.5 Year 4: W - the grammatical difference between plural and possessive -s

4.4b Year 4: using and punctuating direct speech (other punctuation and moving the...

4.1c Year 4: choosing nouns or pronouns appropriately for clarity and cohesion and to...