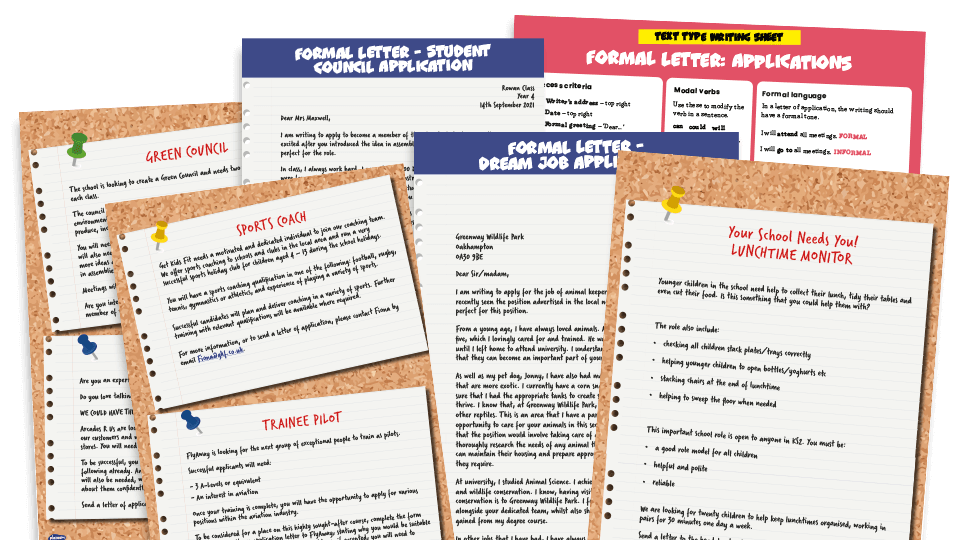 Writing using a formal tone is a skill pupils learn throughout KS2. This formal letter KS2 text types resource pack gives pupils the opportunity to write a letter of application for a role in school or for a dream job. After studying the features of a formal letter, pupils will write their own formal letter in response to the prompts within the pack, or for a position or role linked to your current topic or the class’ interests.

Two examples of formal letters are included, showing WAGOLL (what a good one looks like), to inspire writing and provide an example letter writing template that pupils can refer to when writing their own letters..

What is included in this formal writing KS2 pack?

An example formal letter written by a year 4 child to apply to become a member of the school’s student council.

An example formal letter applying for a position as an animal keeper at a local wildlife park.

Various job adverts are included for pupils to respond to.

A worksheet to support pupils to plan and structure their writing.

A PDF sheet that pupils could use to present their work.

What is a formal letter?

A formal letter is a type of writing used in professional situations. Examples might include a job application, letter of complaint, a letter to a customer or to parents.
Formal letters should be written using a formal tone. The use of Standard English and formal vocabulary is needed.

Year 3/4
Pupils should plan their writing by discussing writing that is similar to that which they are planning to write in order to understand and learn from its structure, vocabulary and grammar.
Pupils will express time, place and cause using conjunctions ...
Pupils will use Standard English forms for verb inflections