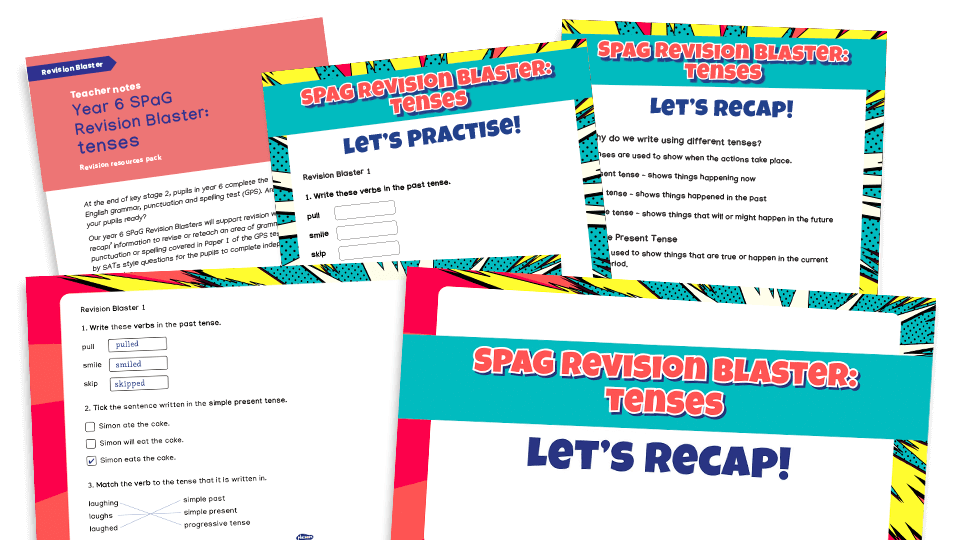 Our Year 6 SPaG Revision Blaster packs are the perfect way to check children’s knowledge and understanding of the KS2 programme of study for English. The area of grammar, punctuation and spelling covered in this SPaG revision blaster is tenses, including the simple, progressive (continuous), perfect and perfect progressive.

The tense shows when the actions happen in a sentence. The verb shows whether the sentence is written in the present tense (happens now), the past tense (happened in the past) or the future tense (will happen at some point). The different tenses are explained below.

The present progressive tense (sometimes called the continuous tense) is used to show something happening in that precise moment or when it is happening now but continued for a longer period of time. It is formed using the verbs is/are/am and the verb ending in the suffix -ing (present participle). He is jumping.

The present perfect tense is used when something has happened and is still relevant now or when something began happening in the past and continues to happen now. It is formed using has / have and the past tense form of the verb (past participle). He has jumped.

The present perfect progressive tense is used for something that started happening in the past and is still happening now. It is formed using have / has + been and the verb ending in the suffix -ing. He has been jumping.

The past progressive tense (sometimes called the continuous tense) is used to show something was not finished before something else happened or for something that continued for some time. It is formed using the verbs was / were and the verb ending in the suffix -ing (present participle). He was jumping.

The past perfect tense is used to show something that happened before something else or for something that started happening in the past and was still happening at a later time. It is formed using had and the past tense form of the verb (past participle). He had jumped.

The past perfect progressive tense is used when something started happening in the past and was still happening at a later time. It is formed using had + been and the verb ending in the suffix -ing. He had been jumping.

G4.1a simple past and simple present
G4.1b verbs in the perfect form
G4.1d present and past progressive
G4.2 tense consistency