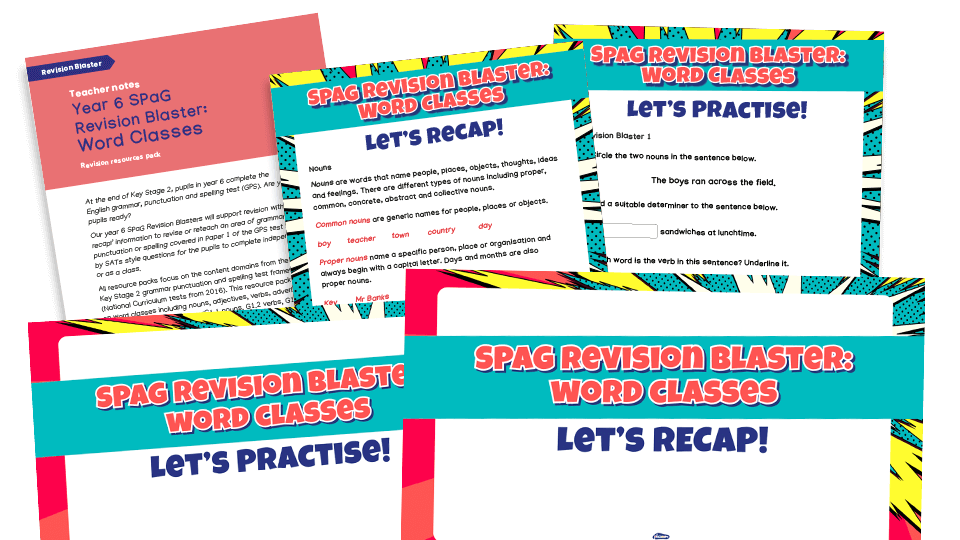 Plazoom’s Year 6 SPaG Revision Blaster packs are the perfect way to check children’s knowledge and understanding of the KS2 programme of study for English. The area of grammar, punctuation and spelling covered in this SPaG revision blaster is word classes including nouns, adjectives, verbs, adverbs, prepositions and determiners.

Nouns are words that name people, places, objects, thoughts, ideas and feelings. There are different types of nouns, including proper, common, concrete, abstract and collective.
Adjectives are words that usually come before a noun and modify it, adding description or specifying which person or object it is. In this sentence ‘The bright sun is high in the blue sky’. the adjectives ‘bright’ and ‘blue’ describe the sun and sky. In the sentence ‘We need plain flour for the recipe.’ the adjective ‘plain’ is specifying which flour we need.
Verbs are words that can identify an action in a sentence. Other verbs join the subject to a description of it and are link verbs. Examples of these include the following: was/were, is/are and be.
Adverbs are words that modify verbs but can also modify adjectives, other adverbs or whole sentences. They can give the answers to the following questions within a sentence: How …? When …?, Where…?, How often…? or How much …?
Adverbs can, but not always, end with the suffix -ly.
A preposition is a word that is used before a noun, pronoun or noun phrase. Prepositions can link these to a verb, another noun or an adjective. The most common preposition is of. Other prepositions can show position or direction, timing and a link or relationship.
Determiners are used before a noun or at the beginning of a noun phrase. They show which noun, how many or how much. Examples of determiners include a, the, some, one, and every. Some determiners are possessive and shows who something belongs to. Possessive determiners are my, your, his, her, its, our and their.