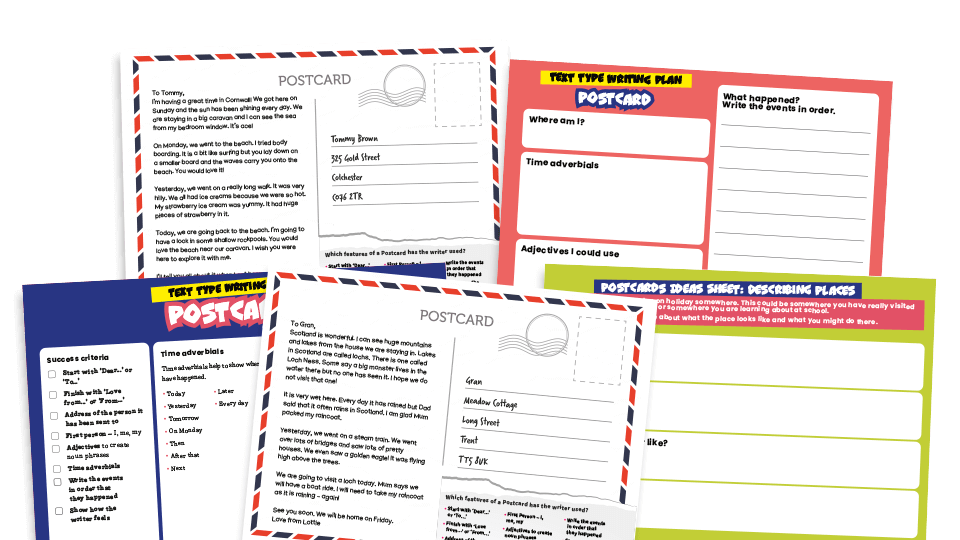 Teach children how to write a postcard with this KS1 text types resource pack. Pupils will write their own postcards recounting a holiday, real or imagined. It could be used within a geography unit about the British Isles, with pupils describing the physical and human features of the places they have visited.

Two model texts are included, showing WAGOLL (what a good one looks like), to inspire writing.

Model Text 1 - Wish You Were Here! An example postcard written by a child to his best friend, recounting the first few days of his holiday in Cornwall.

Model Text 2 - Hello Gran An example postcard recounting a holiday in Scotland.
Postcard writing sheet: a PDF containing success criteria that pupils can use to support their writing. It includes examples of simple time adverbials and using adjectives to create expanded noun phrases.
Postcards Ideas Sheet - Describing Places: a PDF worksheet for pupils to collect ideas before independent writing.
Postcard Writing Plan: a worksheet to support pupils to plan and structure their writing.
Writing Paper: A PDF sheet that pupils could use to present their work.

What is a postcard?

A postcard is a type of recount. A recount is written in the past tense about events that have happened. Examples of texts that are recounts include: diaries, an account of a school event or trip out, an historical account of events, letters and postcards, newspaper articles and retelling well-known stories.