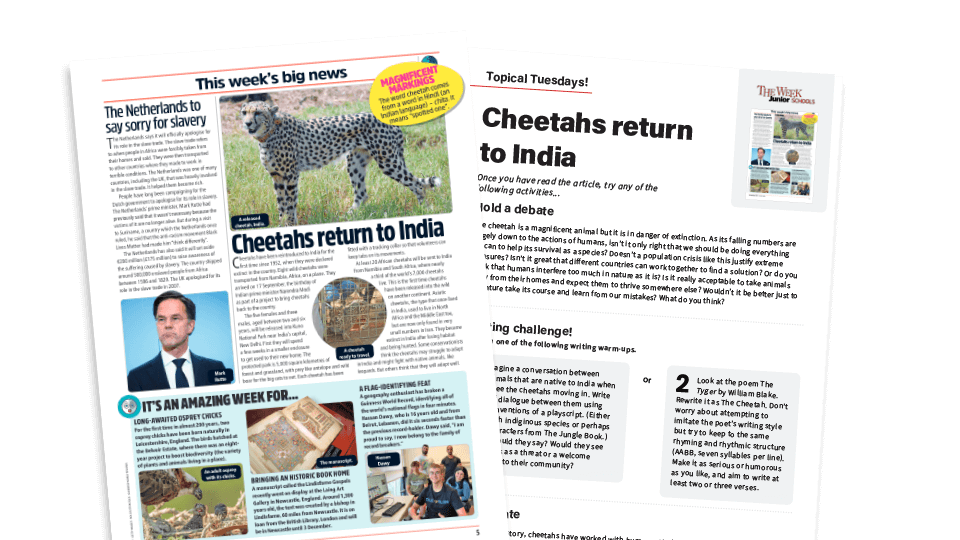 Cheetahs have been reintroduced to India for the first time since 1952, when they were declared extinct in the country. This resources pack includes an article from The Week Junior magazine, along with a sheet of activities designed to get children thinking, talking and writing about what the story means to them.

The cheetah is a magnificent animal but it is in danger of extinction. As its falling numbers are largely down to the actions of humans, isn’t it only right that we should be doing everything we can to help its survival as a species? Or do you think that humans interfere too much in nature as it is? Is it really acceptable to take animals away from their homes and expect them to thrive somewhere else? What do you think?

Imagine a conversation between animals that are native to India when they see the cheetahs moving in. Write a brief dialogue between them using the conventions of a playscript.

OR
Look at the poem The Tyger by William Blake. Rewrite it as The Cheetah. Don’t worry about attempting to imitate the poet’s writing style but try to keep to the same rhyming and rhythmic structure.

Throughout history, cheetahs have worked with humans. Find out how, when and with whom and write a brief explanation detailing what you have discovered.

Plenary Dice and Exit Slips for Feedback and Progress