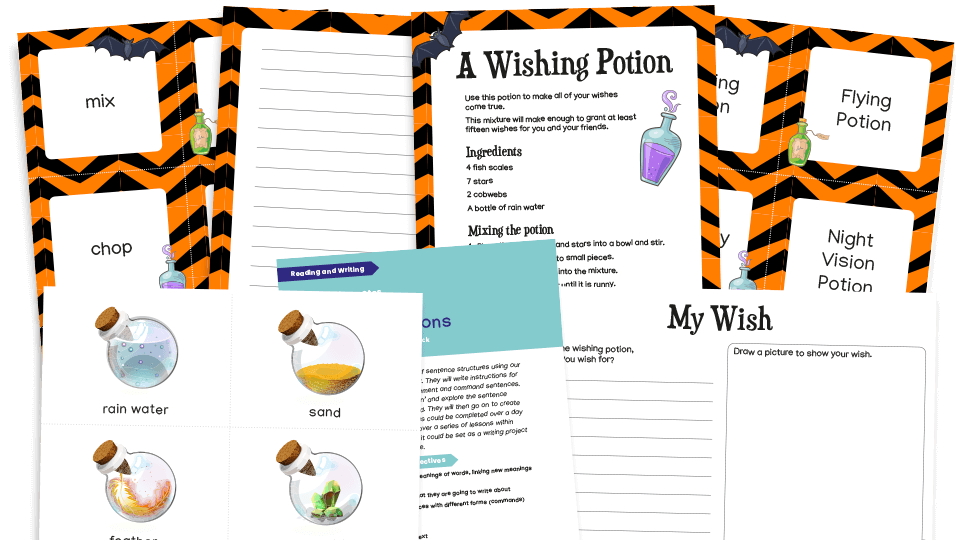 Develop Year 2 pupils’ understanding of different sentence structures, focusing on commands, using our Magical Potions KS1 resource pack. This could be used as a Hallowe’en activity or at any point in the academic year when you are focusing on command sentences.

They will read our model text ‘A Wishing Potion’, showing WAGOLL (what a good one looks like). A planning sheet for pupils to support pupils to plan and write their own science fiction story is included.and explore how the instructions are written, including its use of command sentences. They will then go on to write their own instructions for making a potion, using imperative verbs (bossy verbs) to write commands.

The resource could be used as part of a topic day based on Hallowe’en, or over a series of English lessons. It could also be used as a writing project which would be perfect for home learning.

What is a command sentence?

A command is a sentence that gives an instruction and is used in instructional writing. A command sentence begins with an imperative verb (also known as a bossy verb) such as go, mix, put, push, wash or sit.

Commands are often punctuated with a full stop but an exclamation mark can also be used to show strong emotion or urgency.

What resources are included in this pack?