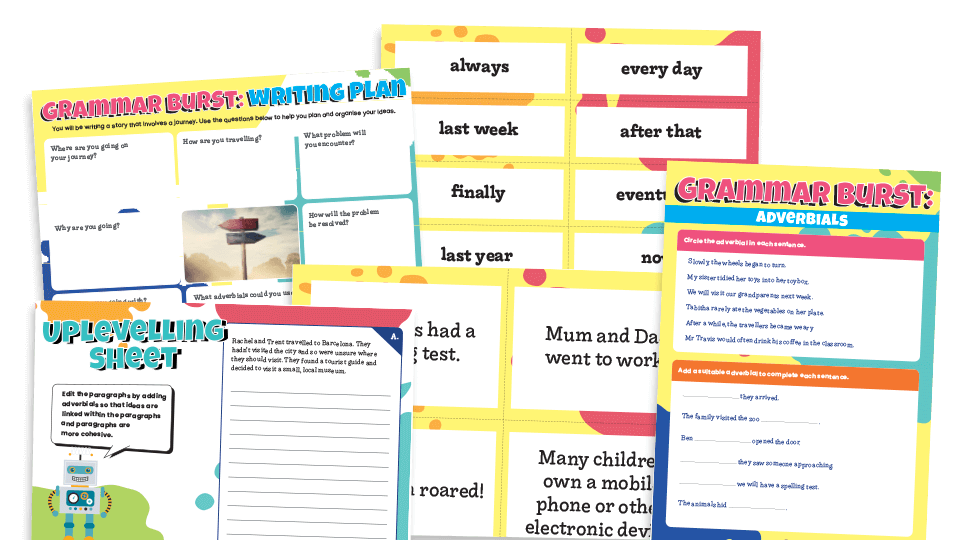 This powerful KS2 grammar resources pack provides everything you need to teach a series of five lessons on adverbials in Year 5, culminating in an extended writing task where children can use their grammatical understanding in context.

Adverbials PowerPoint
With explanations, examples and activities to introduce this topic to your class

Sentence and Adverbial cards
PDF cards for pupils to sort.

Challenge sheet
Circle the adverbials in each sentence, add suitable adverbials to complete the given sentences, change the position of adverbials within sentences and use adverbials when writing descriptive paragraphs about the image shown

Uplevelling sheet
Pupils will edit the sentences given by adding suitable adverbials.

Writing paper
For pupils to write their final draft

What is an adverbial?
Adverbials are used like adverbs. They are words or phrases that add more information to a verb, and explain how, when or where something happened.

Later, we ate our lunch with our friends.
Just then, we heard a noise.
I like to walk through the forest occasionally.
It’ll be my birthday in September.

National Curriculum English programme of study links
Pupils should be taught to link ideas across paragraphs using adverbials of time (for example later), place (for example nearby) and number (for example secondly).