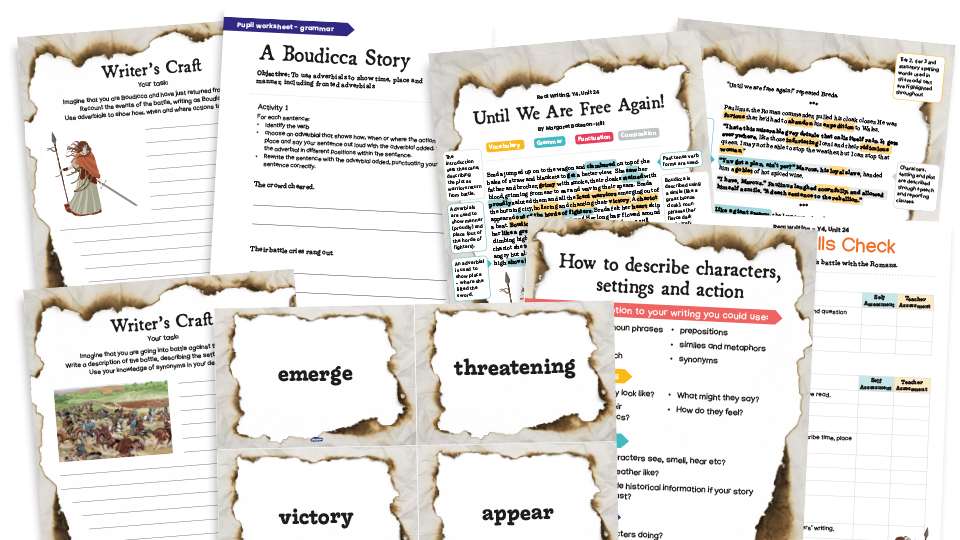 Unit overview
This writing unit for Year 4 is built around an original model text by Margeret Bateson-Hill; an exciting narrative recounting the epic battle between Boudicca’s Iceni Tribe and the Romans. The example text is available as a PDF in three versions (plain, illustrated and annotated); annotated and non-annotated PowerPoint presentations are also included.

In this two-week unit, pupils will explore how the author has described characters, setting and actions through the use of synonyms and adverbials. In their final writing task, pupils will write their own story about Boudicca’s rebellion against the Romans, changing the viewpoint of the story. This unit could be used as part of a topic on The Roman Empire and its impact on Britain.

1. Vocabulary:To build a varied and rich vocabulary through the use of synonyms

Pupils will: match words that are synonyms; write a description of a Roman battle, using their knowledge of synonyms

2. Grammar: To use adverbials to show time, place and manner, including fronted adverbials

Pupils will: add adverbials to sentences to modify verbs, exploring where they could be positioned within sentences; write a description of Boudicca using adverbials to show time, place and manner