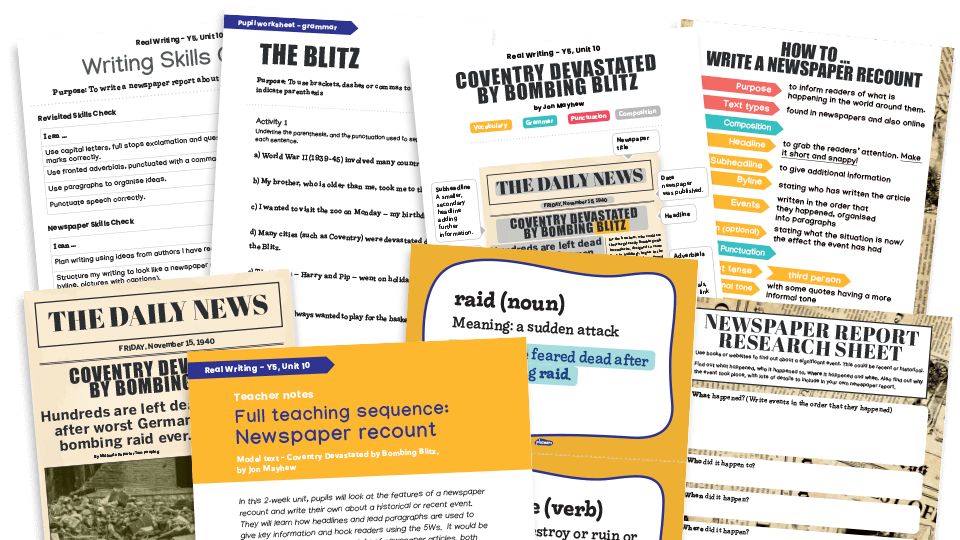 This writing unit for Year 5 is built around an original model text by Jon Mayhew; an engaging recount in the form of a newspaper about the bombing of Coventry in World War II. The example text is available as a PDF in three versions (plain, illustrated and annotated); annotated and non-annotated PowerPoint presentations are also included.

Over the course of two to three weeks, pupils will explore the features of a newspaper report, a type of recount, identifying the headlines and lead paragraph. They will also learn how parenthesis is punctuated using brackets, dashes or commas and explore the use of direct and reported speech.

Two fully-resourced lessons are included for the following Year 5 English objectives, which can form part of the unit or be taught discretely:

1. To use brackets, dashes and commas to indicate parenthesis

2. To select appropriate grammar and vocabulary by using direct and reported speech

Additional skills to teach or revisit

Direct speech writes exactly what a person says, punctuated using inverted commas and other speech punctuation.
For example:
‘Everyone must follow the rules,’ explained Roger.

What is reported speech?

Reported speech states what someone said without necessarily reporting their actual words.
For example:
Roger explained that the rules must be followed by everyone.