Year 4 Model Text Resource Pack 5: ‘Who do You Think You Are? (Report; History - Anglo-Saxons) 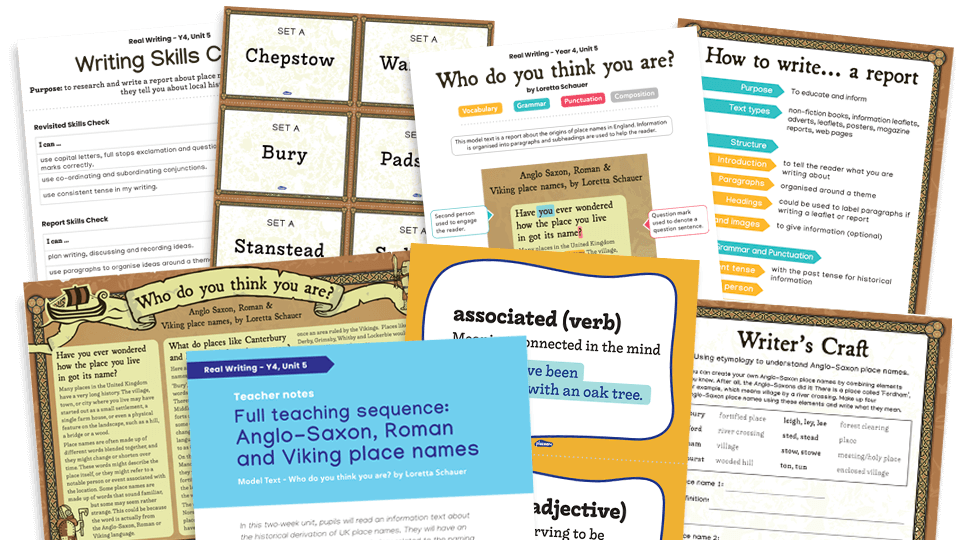 Real Writing Year 4, Unit 5
Who do you think you are?, by Loretta Schauer
Curriculum links: History (Anglo-Saxons)

Unit overview
This writing unit for Year 4 is built around an original model text by Loretta Schauer - an information text about place names. The example text is available as a PDF in three versions (plain, illustrated and annotated); annotated and non-annotated PowerPoint presentations are also included.

In this two-week unit, pupils will read an information text about the historical derivation of UK place names. They will have an opportunity to learn technical vocabulary related to the naming of settlements, and look at the etymology of Anglo-Saxon place names. They will also consider the importance of using verb tenses consistently. Finally, they will research and write a report about place names in their own area.

Grammar: To edit writing to check tenses are used consistently
Pupils will: revisit tenses; understand the importance of consistent tense use; complete a fill-the-gaps activity about tenses; correct a paragraph of writing that uses inconsistent tenses.