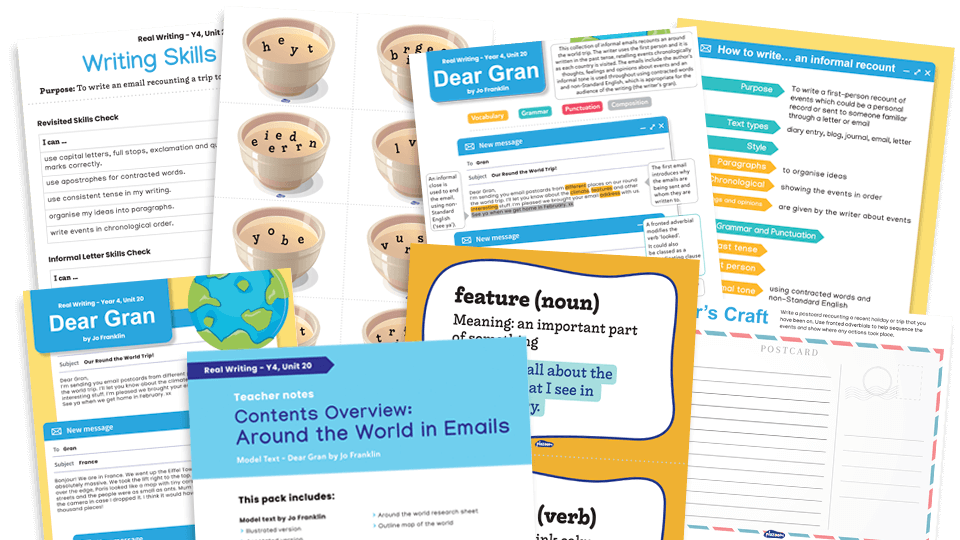 This writing unit for Year 4 is built around an original model text by Jo Franklin; an entertaining informal recount of an around the world trip told through a series of emails to a relative. The example text is available as a PDF in three versions (plain, illustrated and annotated); annotated and non-annotated PowerPoint presentations are also included.

In this two-week unit, pupils will explore words with ei, eigh and ey used to spell the sound /ai/. They will also investigate how fronted adverbials are used to modify verbs, sequencing events and showing where they took place. In their final writing task, pupils are asked to write their own email recount of a real or imagined holiday. This unit could be used within a geography topic about Europe or within any topic that explores the physical and human features of countries around the world.

1. Vocabulary: To spell words that are often misspelt (ei, eigh and ey)

2. Grammar: To use fronted adverbials in KS2

Pupils will: identify adverbials and adverbial phrases in sentences and rewrite these so that the adverbials are fronted; write a postcard about a recent holiday or trip, using fronted adverbials.