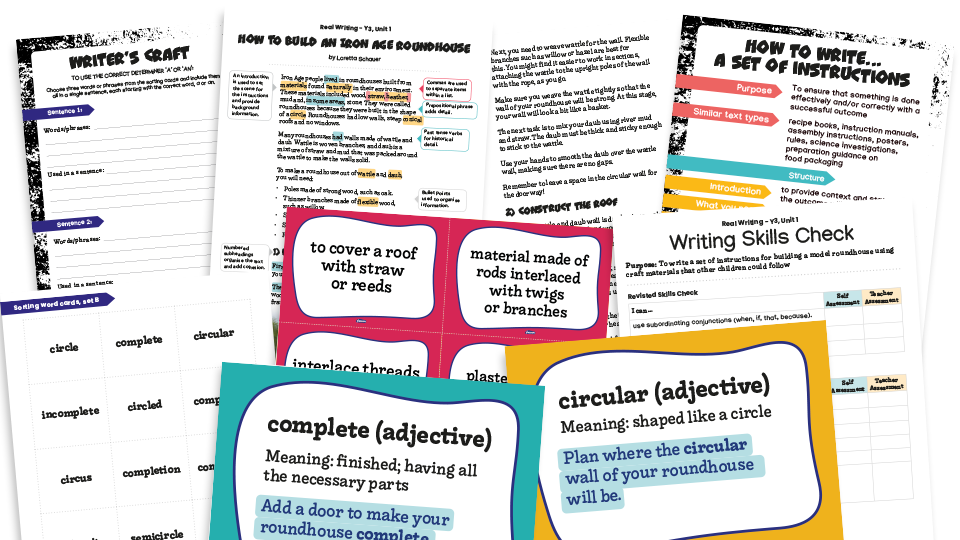 This writing unit for Year 3 is built around an original model text by Loretta Schauer; a set of instructions outlining how to build an Iron Age roundhouse. The example text is available as a PDF in three versions (plain, illustrated and annotated); annotated and non-annotated PowerPoint presentations are also included.

In this two-week unit, pupils will have an opportunity to learn technical vocabulary used in the construction of historical buildings. It will culminate in them writing their own set of instructions for how to make a model roundhouse using craft materials. This unit could be used as part of a topic on the theme of Iron Age Britain and could be linked to Design & Technology.

Pupils will: sort word cards into word families; create definitions for made up words based on their roots, and work them into sentences; use the roots they have learned to create their own new words and definitions.

2. Grammar - use of the forms ‘a’ or ‘an’ according to whether the next word begins with a consonant or a vowel

The words ‘a’ and ‘an’ are articles, which is a type of determiner. The use of ‘a’ or ‘an’ is determined by the first letter of the word it comes before. If the word begins with a vowel, then ‘an’ is used. If it begins with a consonant, then ‘a’ is used.

The exception is when the word begins with the letter ‘u’ where it is making the /yoo/ sound, for example unicorn or useful.
When using an expanded noun phrase, the article that is used is determined by the word immediately after it. If adjectives are used, then it is the adjective that should be looked at.