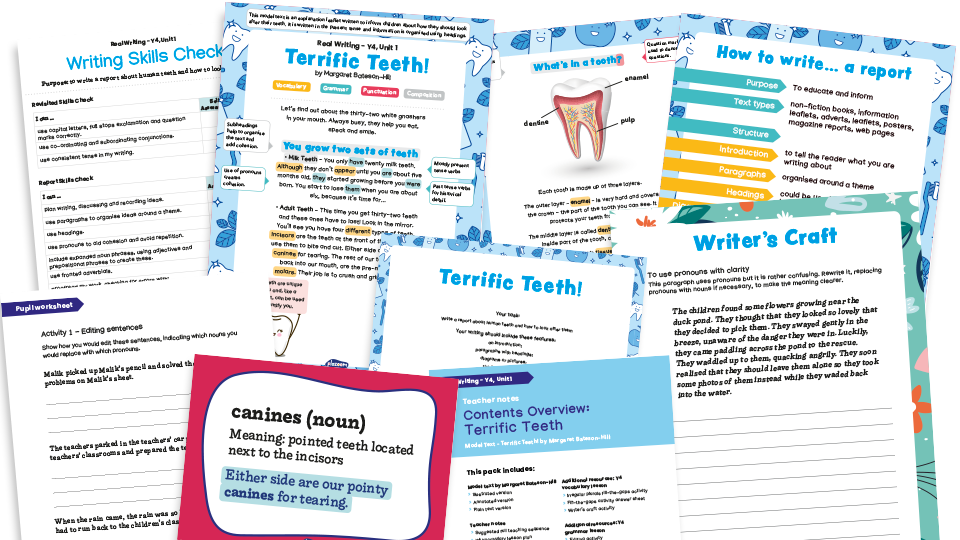 This writing unit for Year 4 is built around an original model text by Margaret Bateson-Hill - an explanation text in the form of a leaflet aimed at children, explaining how they should look after their teeth. The example text is available as a PDF in three versions (plain, illustrated and annotated); annotated and non-annotated PowerPoint presentations are also included.

In this two-week unit, pupils will identify the key features of an explanation text and have an opportunity to learn technical vocabulary related to teeth and how to take care of them. They will investigate and learn to spell irregular plurals, and understand how to use pronouns for clarity. Finally, they will write their own explanatory text about human teeth and how to look after them.

Pupils will: revisit plurals and the rules for adding -s and -es to singular nouns to create plurals; understand that some words do not follow this rule; complete a table of irregular plurals; write a paragraph using irregular plurals.

2. Composition: To use pronouns for clarity and cohesion

Pupils will: revisit pronouns; understand how pronouns can be used to improve clarity; rewrite sentences with pronouns to avoid repetition; rewrite a paragraph, using pronouns for clarity.

What is an explanation text?

An explanation text explains how or why processes occur or why something is the way it is. Explanatory texts includes information about causes, motives or reasons rather than simply giving a description of what happens (this would be a report).

Examples of explanation texts include explanations of processes in science, explaining how something works (such as an invention), explaining phenomenon such as volcanic eruptions, or the water cycle or question and answer style articles.