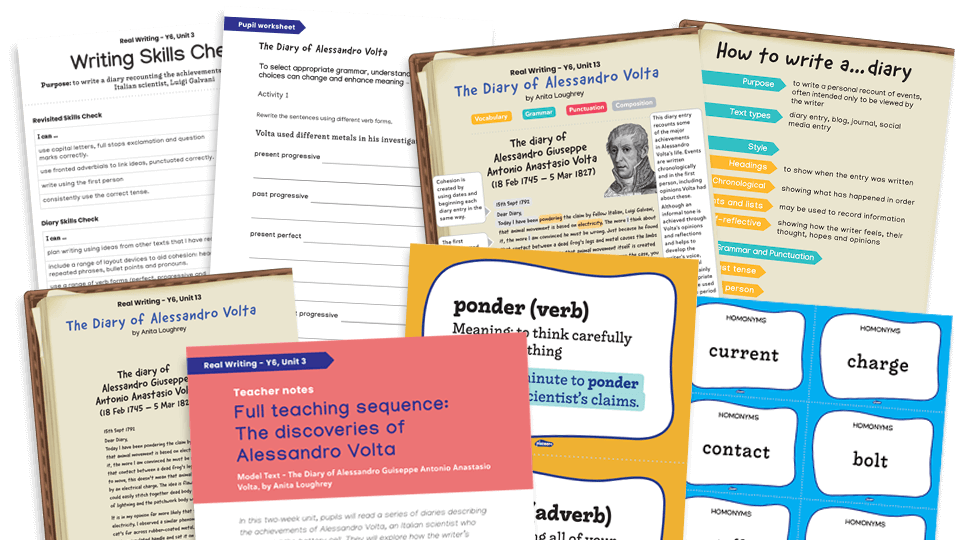 Unit Overview
This writing unit for Year 6 is built around an original model text by Anita Loughrey; a diary recounting the key events and achievements in Alessandro Volta’s life. The example text is available as a PDF in three versions (plain, illustrated and annotated); annotated and non-annotated PowerPoint presentations are also included.

In this two-week unit, pupils will read a series of diaries written in the 18th and early 19th century by the Italian scientist, exploring language used. They will learn how different verb forms give information about events, including the use of the perfect and perfect progressive form. Pupils will also investigate how words can have multiple meanings. In the final task, pupils will write a diary recounting the achievements of another Italian scientist, Luigi Galvani, following research about the scientists. This unit could be used as part of a science topic based on electricity.

1. Vocabulary: To distinguish between words that are often confused - homonyms

Pupils will: use a dictionary to find the different meanings of homonyms; write sentences showing how the word can be used for its differing meanings.

2. Grammar: To select appropriate grammar, understanding how these choices can change and enhance meaning - verb forms

Pupils will: rewrite sentences using different verb forms; write a diary about a recent event at school or home using a variety of verb forms.