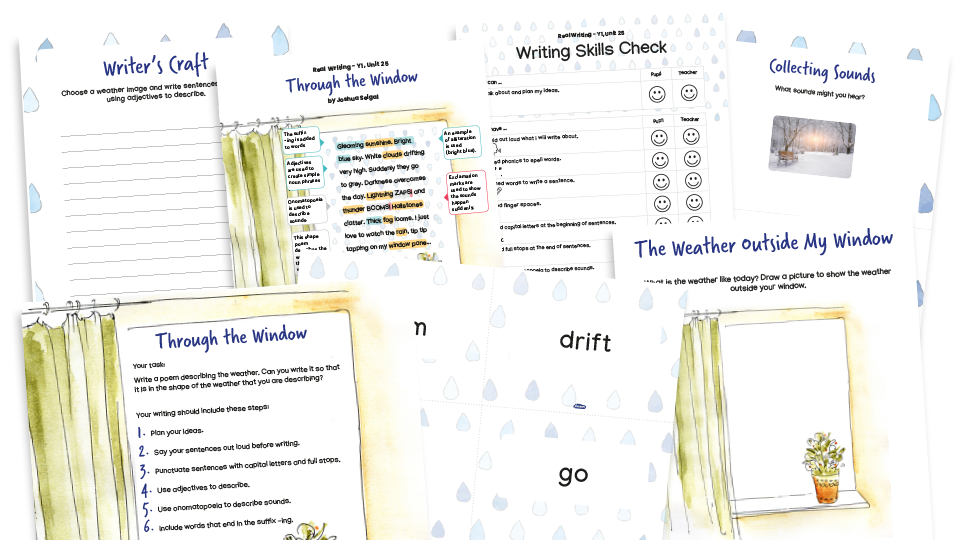 This writing unit for Year 1 is built around an original text by Joshua Seigal - a shape poem describing the weather. The example text is available as a PDF in three versions (plain, illustrated and annotated); annotated and non-annotated PowerPoint presentations are also included.

In this two-week unit, pupils will learn how adjectives can be used to describe, including examples that use alliteration, and they will use onomatopoeia to describe sounds. Pupils will also learn how to add the suffix -ing to words where no change is needed to the root word. At the end of the unit, pupils will write their own shape poem about the weather using the skills that they have been taught.

1. Vocabulary: to add the suffix -ing to words where no change is needed to the root word

Pupils will: learn how the suffix -ing can be added when no change is needed to the root word.

2. Grammar: to compose simple sentences that use adjectives

3. Grammar: to say out loud what they will write about – using onomatopoeia

Pupils will: explore onomatopoeia, listing sounds that they associate with different weathers.

What is a suffix?

A suffix is a group of letters that can be added to the end of a word. The suffix can change the word’s meaning.

Examples of suffixes include -ing, -ed, -er and -est.

Adjectives are words that modify a noun and usually come before the noun in a sentence. They add description or specification.

The bright sun is high in the blue sky.

The adjectives ‘bright’ and ‘blue’ describe the sun and sky.

We need plain flour for the recipe.

The adjective ‘plain’ is specifying which flour we need.

A word that is formed from the sound that is made.