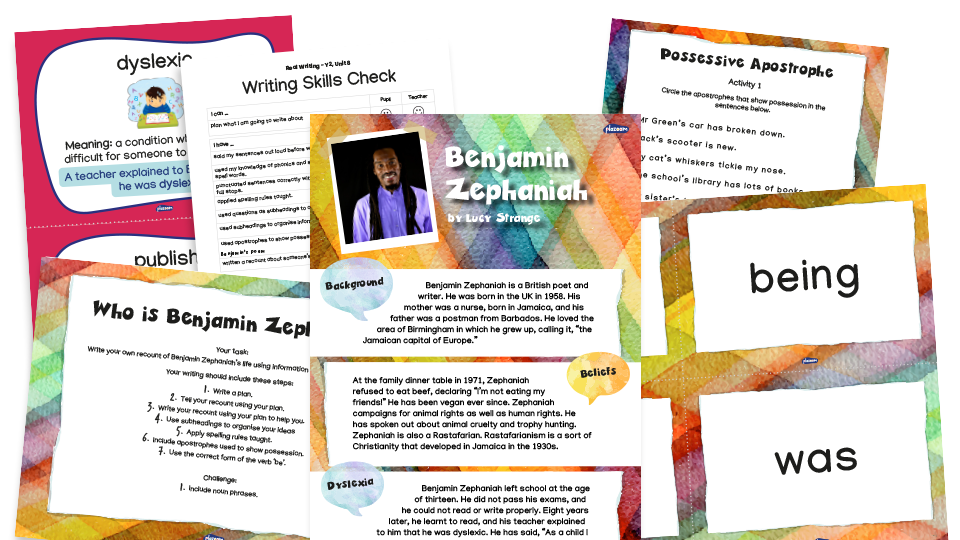 Unit overview
This writing unit for Year 2 is built around an original text by Lucy Strange - a recount of the life and achievements of the poet, musician and campaigner, Benjamin Zephaniah. The example text is available as a PDF in three versions (plain, illustrated and annotated); annotated and non-annotated PowerPoint presentations are also included.

In this two-week unit, pupils will learn the features of a recount and will organise the events in Zephaniah’s life using resources provided. Pupils will learn the spelling rules for words that include the /f/ sound when spelt with a ‘ph’. Pupils will learn about the verb ‘to be’, identifying examples in the text and using them in their own writing using Standard English. Pupils will also learn how the apostrophe can be used to show singular possession. In the final writing task, pupils will write their own recount about Benjamin Zephaniah, using the information in the model text and other information that they are given. This unit gives pupils the opportunity to write for a range of purposes and learn about an inspirational figure.

Key curriculum skills
Two fully-resourced lessons are included for the following Year 1 English objectives, which can form part of the unit or be taught discretely: