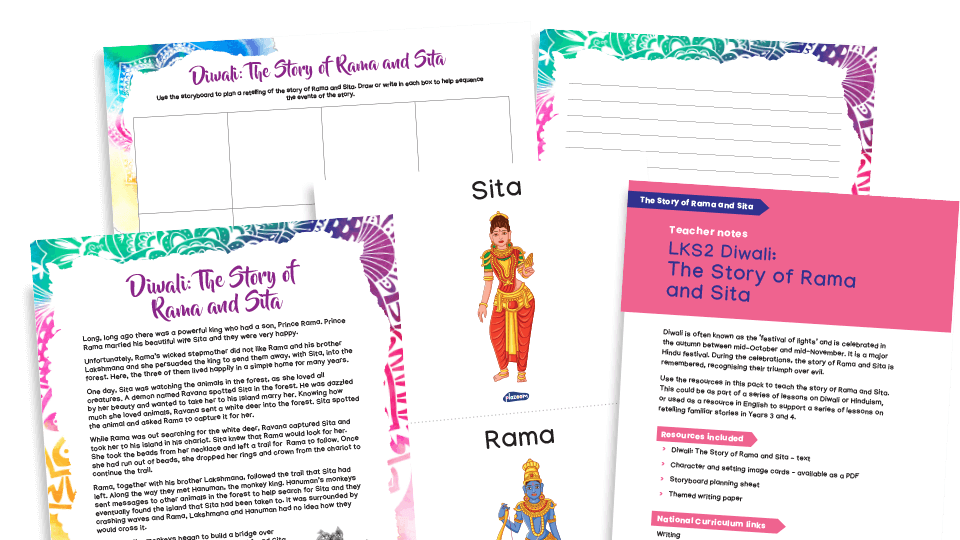 Diwali is often known as the ‘festival of lights’ and is celebrated in the autumn between mid-October and mid-November. It is a major Hindu festival. During the celebrations, the story of Rama and Sita is remembered, recognising their triumph over evil.

Use the resources in this pack to teach the story of Rama and Sita. This could be as part of a series of lessons on Diwali or Hinduism, or used as a resource in English to support a series of lessons on retelling familiar stories in Year 3 or Year 4. Pupils will explore the characters in the story, collecting words or phrases to describe them as well as some of the settings where the story takes place. These can then be used to add descriptions when retelling the story of Rama and Sita.

What is included in this Key Stage 2 Diwali resource pack?

Diwali is a religious festival that takes place in the autumn. It is most widely associated with Hinduism but is also celebrated by Sikhs, Buddhists and Jains (an ancient Indian religion). It also often called the ‘festival of lights’ as rows of lights are strung up as part of the celebrations and diya lamps are lit.

Hindu deities and stories are remembered during Diwali and these vary from region to region. The most common involve Lakshmi, the goddess of wealth and prosperity, and remembering the story of Rama and Sita.