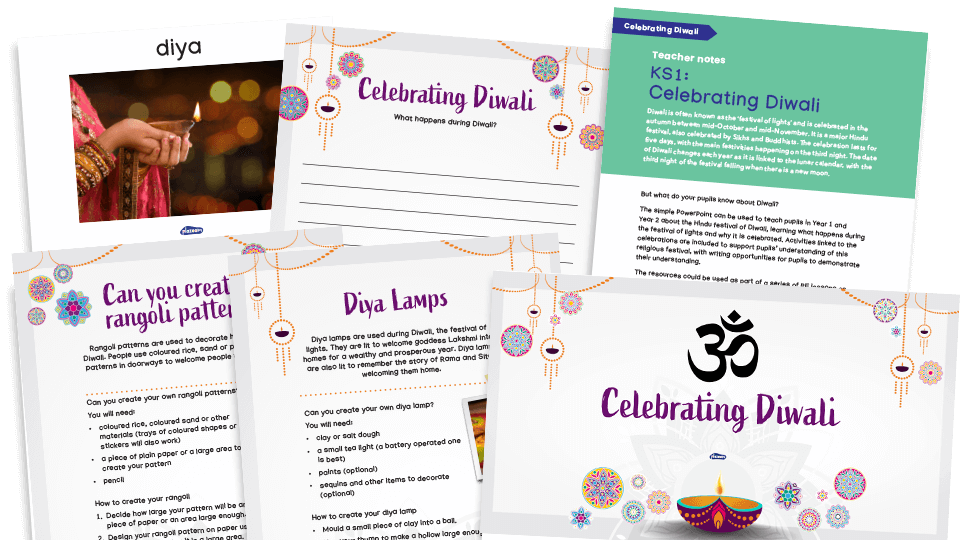 Diwali is often known as the ‘festival of lights’. It’s a major Hindu festival that is also celebrated by Sikhs, Jains and Buddhists. The celebration lasts for five days, with the main festivities happening on the third night. The date of Diwali changes each year but is always sometime between mid-October and mid-November. It is linked to the lunar calendar, with the third night of the festival falling when there is a new moon.

But what do your pupils know about Diwali?

The simple PowerPoint can be used to teach pupils in Year 1 and Year 2 about the Hindu festival of Diwali, learning what happens during the festival of lights and why it is celebrated. Activities linked to the celebrations are included to support pupils’ understanding of this religious festival, with writing opportunities for pupils to demonstrate their understanding.

The resources could be used as part of a series of RE lessons on Hinduism and their celebrations or during the autumn term to introduce pupils to Diwali.

What is included in this Key Stage 1 Diwali resource pack?

Diwali is a religious festival that takes place in the autumn. It is most widely associated with Hinduism but is also celebrated by Sikhs, Buddhists and Jains (an ancient Indian religion). It also often called the ‘festival of lights’ as rows of lights are strung up as part of the celebrations and diya lamps are lit.

Hindu deities and stories are remembered during Diwali and these vary from region to region. The most common involve Lakshmi, the goddess of wealth and prosperity, and remembering the story of Rama and Sita.