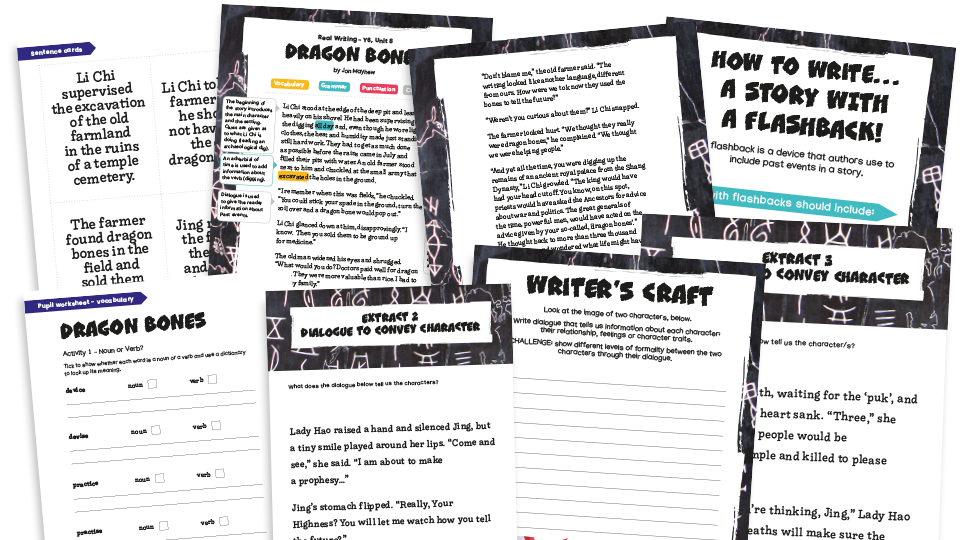 Unit Overview
This writing unit for Year 6 is built around an original model text by Jon Mayhew; a narrative describing the discovery of Oracle Bones that includes a flashback showing how they were used during the Shang Dynasty. The example text is available as a PDF in three versions (plain, illustrated and annotated); annotated and non-annotated PowerPoint presentations are also included.

Throughout this two-week unit, pupils will explore how dialogue is used to convey character in narratives, showing relationships between characters, their feelings and character traits. They will also investigate words that are often confused and how knowing whether the word is a noun or verb can help with spelling (e.g. advice or advise). In the final writing task, pupils will write their own stories that include a flashback. This unit could be used alongside a topic on the Shang Dynasty, or the achievements of ancient civilisations as part of the history curriculum.

Key Curriculum Skills
Two fully-resourced lessons are included for the following UKS2 English objectives, which can form part of the unit or be taught discretely:

1. Vocabulary: To distinguish between words that are often confused: words ending in -ce/-cy and -se/-sy

Pupils will: identify whether words are nouns or verbs; choose the correct spelling of a word for a given sentence; write their own sentences using words given

2. Composition: To use dialogue to convey character

Pupils will : annotate examples of dialogue from the model text, showing how it describes characters; write dialogue, using this to describe characters.