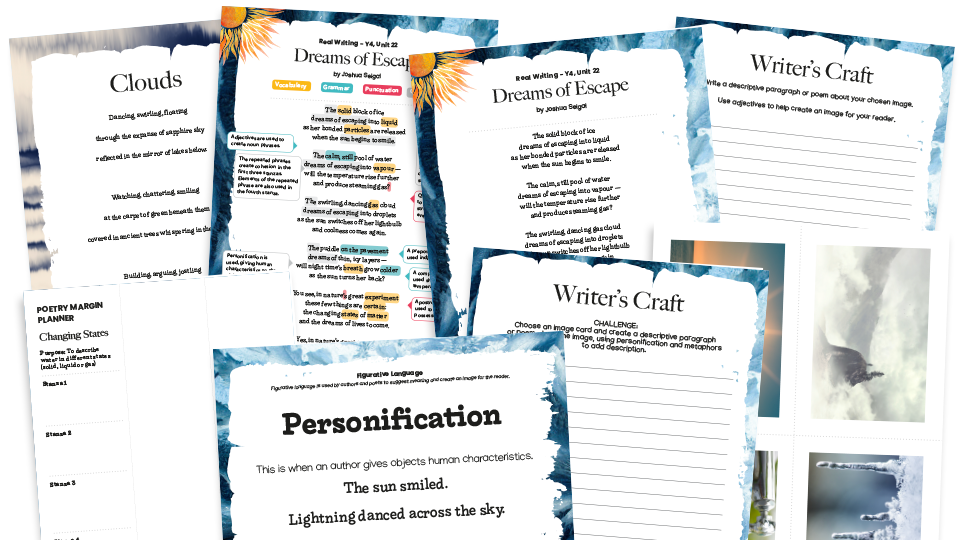 This two-week writing unit for Year 4 is built around an original model text by Joshua Seigal; a delightful KS2 poem describing changes of state as water is heated and cooled. The example text is available as a PDF in three versions (plain, illustrated and annotated); annotated and non-annotated PowerPoint presentations are also included.

Through a series of scaffolded activities, pupils will explore the poet’s use of figurative language, ultimately creating their own poem describing how water changes state through heating and cooling. This unit could be used within a science topic on water or states of matter.

1. Vocabulary: To use adjectives to modify nouns

2. Composition: To investigate how figurative language is used in poetry

How do adjectives modify nouns?

Adjectives can be added to a noun phrase to expand them to add detail to or specify the noun.

What is figurative language?

What is a metaphor?

A metaphor is a figure of speech where you say one thing (figuratively) is another thing.

This is a figure of speech where you apply human or natural characteristics to objects.