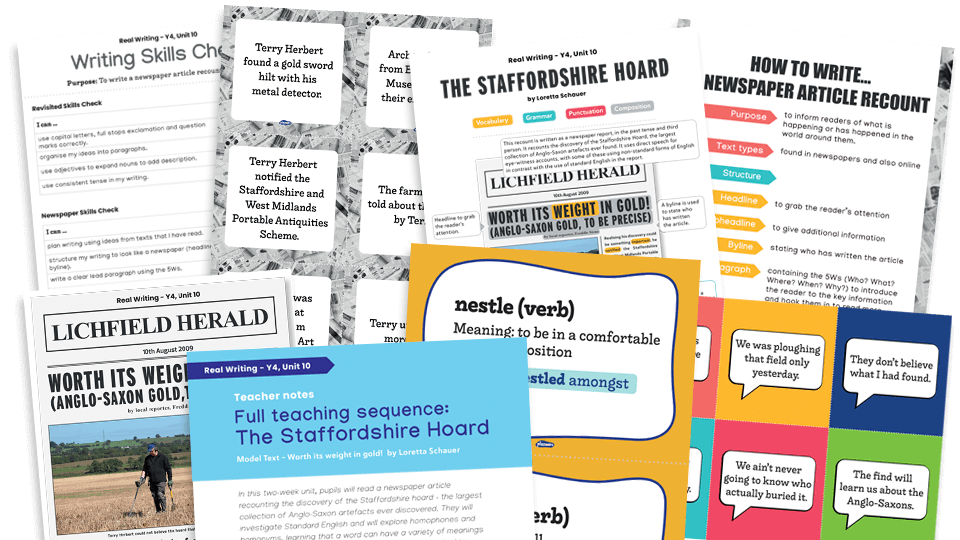 This writing unit for Year 4 is built around an original model text by Loretta Schauer; a newspaper article recounting the discovery of the Staffordshire Hoard, the largest collection of Anglo-Saxon artefacts ever discovered. The example text is available as a PDF in three versions (plain, illustrated and annotated); annotated and non-annotated PowerPoint presentations are also included.

In this two-week unit, pupils will investigate Standard English and explore homophones and homonyms, learning that words can have more than one spelling or meaning. In their final writing task, pupils are asked to imagine that a new Anglo-Saxon hoard has been found somewhere in the country. They will then write their own newspaper report recounting the find. This unit could be used within a history topic on the Anglo-Saxons.

Two fully-resourced lessons are included for the following Year 4 English objectives, which can form part of the unit or be taught discretely:

1. Vocabulary: To use a dictionary to look up the spelling and meaning of words

2. Grammar: To use Standard English instead of local spoken forms

Homophones are words that sound the same but are spelt differently and have different meanings.

These are words that are spelt the same but have different meanings and are usually also pronounced differently.


In Year 4, the focus is on the correct use of verb inflections, particularly for the verbs be, do and have, checking that the subjects and verbs agree.

Direct speech is when the exact words that someone says are written.

How do we punctuate direct speech?