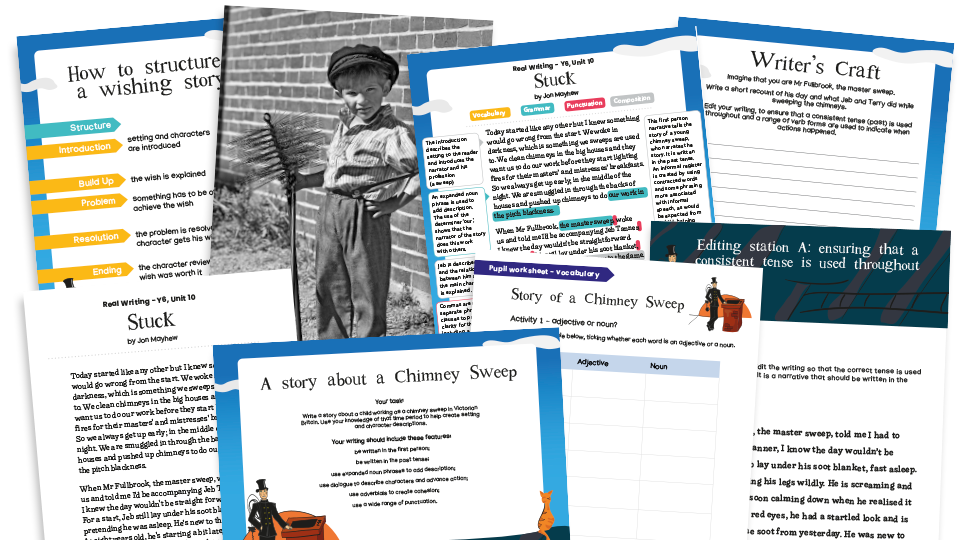 Unit overview
This writing unit for Year 6 is built around an original model text by Jon Mayhew; an engaging first-person narrative about a young chimney sweep in Victorian Britain. The example text is available as a PDF in three versions (plain, illustrated and annotated); annotated and non-annotated PowerPoint presentations are also included.

In this two-week unit, pupils will explore the structure of a wishing story and how the main character wishes that he did not have to climb chimneys anymore. They will explore how characters are created through the use of descriptions and dialogue and will learn how to edit texts to ensure that a consistent tense is used throughout. Pupils will also investigate how the use of suffixes can change the meaning and word class of a word. The final writing task asks pupils to write their own story based on the life of a young chimney sweep. This unit could be used as part of a history topic looking at changes in social history or as part of a local history topic on Victorian Britain.

Key curriculum skills
Two fully-resourced lessons are included for the following UKS2 English objectives, which can form part of the unit or be taught discretely:

Pupils will: identify whether words are adjectives or nouns; change adjectives to nouns using the suffix ‘-ance’; complete dictionary entries for words ending in ‘-ant’ and ‘-ance’

2. Composition: To evaluate writing to ensure consistent tense throughout

Pupils will: edit a piece of writing to ensure it is in the correct tense; write a recount, ensuring consistent tense is used throughout and a variety of verb forms