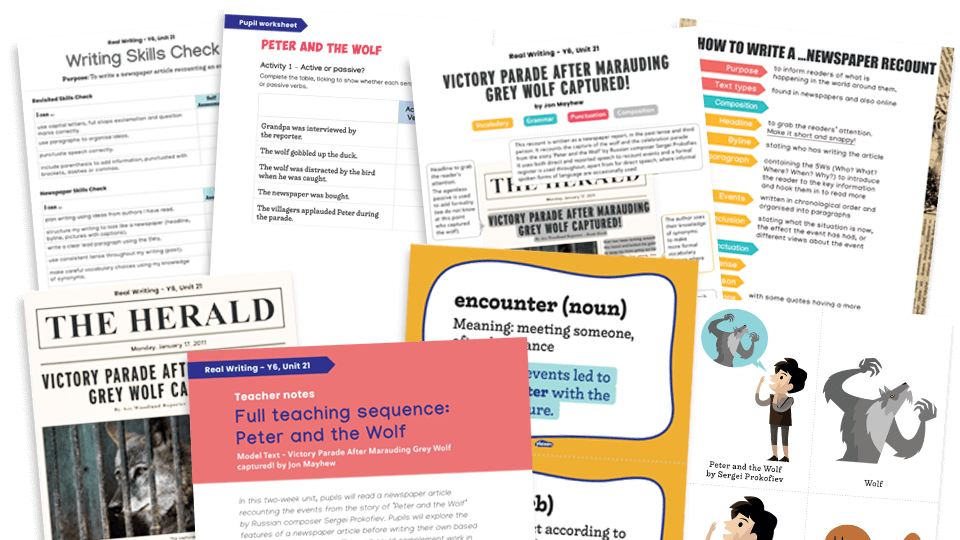 Unit Overview
This writing unit for Year 6 is built around an original model text by Jon Mayhew; a newspaper article recounting the events from the story of ‘Peter and the Wolf’ by Russian composer Sergei Prokofiev. The example text is available as a PDF in three versions (plain, illustrated and annotated); annotated and non-annotated PowerPoint presentations are also included.

In this two-week unit, pupils will explore the features of a newspaper article before writing their own based on other well-known tales. This unit could complement work in music through listening to high quality recordings of Prokofiev’s compositions.

Pupils will: record what different characters might say about what happens to the wolf in the story ‘The Three Little Pigs’ thinking about different levels of formality that the characters might use in their spoken language. Write a short newspaper article, using the quotes from previous activity and eyewitness accounts.

2. To use passive verbs to affect the presentation of information in a sentence

Pupils will: Identify whether sentences use active or passive verbs. Change sentences so they are written with passive verbs. Write a letter from the wolf to the pigs, apologising
for his actions - they must use passive verbs in their letter, including the agentless passive.